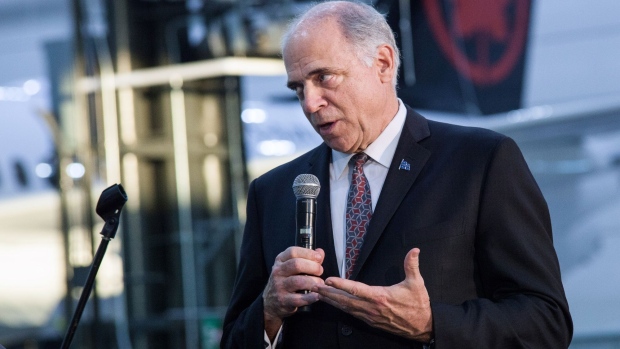 (Bloomberg) -- Footwear retailer Aldo Group Inc. could receive a capital injection from Quebec’s government as it works through a court restructuring triggered by the pandemic.

“We are, through Investissement Quebec, at the table with them to look at what’s the best structure going forward,” Economy Minister Pierre Fitzgibbon said in an interview with Bloomberg News.

“We’re going to be helping,” he said, adding it’s too early to give an amount or a structure for the investment. “It could be equity.” Investissement Quebec is the government’s investment and lending arm.

Montreal-based Aldo, which listed $473 million in debt in its bankruptcy proceedings, has reopened 199 stores and is planning to reopen 24 more that were closed due to Covid-19. It has also laid off about 260 people from its head office, it said in its most recent filings.

Fitzgibbon, a former business executive who is a key player in the nationalist government of Premier Francois Legault, is the minister who spearheads Quebec’s efforts to use its investment arm to prop up or assist key companies. Shortly before the pandemic, he helped lead the government’s side in negotiations that saw Bombardier Inc. extricate itself from a commercial jet venture with Airbus SE.

Legault’s government has emphasized trying to make Quebec businesses more competitive to close the income gap with neighboring Ontario. Fitzgibbon said a restructuring of Aldo can help it adjust to a retail landscape in which e-commerce is more important.

Aldo management is studying how to restructure leases and what its new capital structure should look like, Fitzgibbon said. The company could not be immediately reached for comment.

“These recaps, they’re not good. People don’t like to go through those, but you know what? It’s a good way to clean up, because in the case of Aldo, they’re negotiating with the landlords all over the world and they’re going to close some shops,” Fitzgibbon said.

“It’s a good process for them to do a cleansing of what they didn’t like and also providing some capital for further going to the digital world,” he said.

The retail and wholesale sector employs about about 660,000 people in Quebec, Fitzgibbon said, and the government has to be mindful of the impact certain retailers have on employment levels.

“If you look at Aldo, they design their shoes in Quebec, they have an office design center, distribution, they began their transition into being more digital,” he said. Aldo is strategic to the province “from a standpoint of innovation, a standpoint of being a brand that is world renowned.”

Aldo has struggled in recent years to maintain relevance in a world of increasing acceptance of casual footwear. Chief Executive Officer David Bensadoun said in a 2018 interview that the company was competing with makers of athletic wear as more workplaces embrace casual attire.

Aldo, which also sells accessories such as handbags, was founded by Bensadoun’s father, Aldo Bensadoun, in 1972.