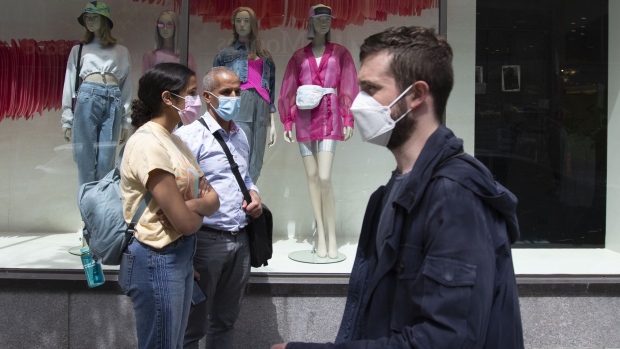 People wearing protective masks wait in line to enter at a La Maison Simons Inc. store in Montreal, Quebec, Canada, on Monday, May 25, 2020. Premier Francois Legault said in news conference in Quebec City that the province is entering "a new stage." , Bloomberg

Inflation is likely to be temporary and will affect many sectors of the economy, the head of Quebec’s $305 billion pension manager said.

“Our forecast is that it will reach about 2.9 per cent in the U.S.,” he said, adding that  inflation is likely to fade next year.

Caisse manages $390 billion (US$305 billion) in pensions of retirees in Quebec, Canada’s second-most populous province, as well as provincial insurance plans. It rode a rising stock market and private equity gains to a 5.6 per cent return in the first half of this year.

Emond, 48, plans to boost investments in private credit and infrastructure, he said in an interview with Bloomberg last month. Those plans include hiring.

Emond, who joined the fund in 2019 from Bank of Nova Scotia, was appointed CEO in January 2020.