Canada’s grain movement is grinding to a near halt, sparking millions of dollars in losses a day after a series of rail blockades left shipments of wheat and canola stranded in the nation’s Prairies.

“We’re in uncharted waters here,” said Mark Hemmes, president of Edmonton, Alberta-based Quorum Corp., a company hired by the federal government to monitor Canada’s grain transportation system. “I cannot recall ever seeing a situation that’s as strange and bad as this one.”

In the last three weeks, grain shipments to Canadian ports dropped by 475,000 metric tons from a year earlier, costing the industry as much as $130 million from lost sales, contract penalties and demurrage, Hemmes estimates. There are 53 ships waiting for grain in Vancouver and Prince Rupert, just two shy of the all-time record set in the 2013-14 crop year when bin-busting harvests clogged rail lines, he said. 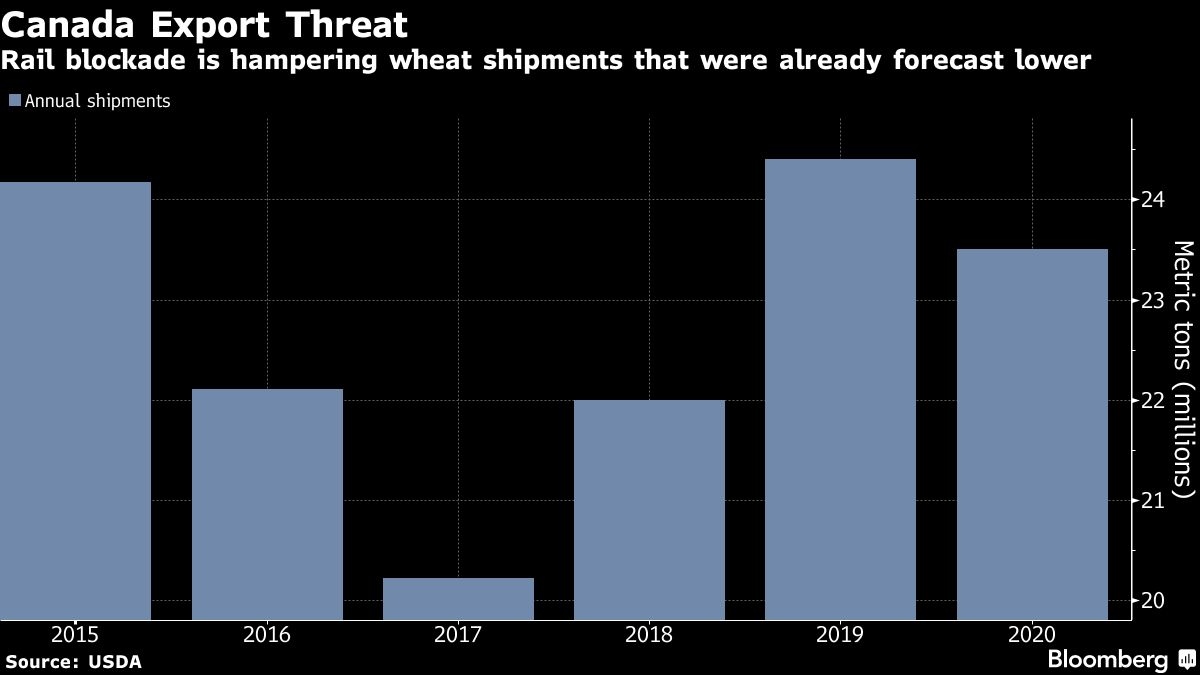 Canada is the world’s largest shipper of canola and one of the largest wheat exporters.

Grain companies may have to defer new sales into summer, a time when the average prices could drop $25 per ton, Hemmes said.

The last time the nation’s grain shippers saw such a severe backlog the government ordered railways to increase the volumes of crops moved. The current situation is different and shippers of multiple commodities are impacted, he said.

“It just adds insult to injury for the farmer,” said Tom Steve, general manager of the Alberta Wheat and Barley Commissions in Calgary. “Last week, a number of grain companies simply stopped taking deliveries until the backlog stopped.”

Farmers don’t get paid when they are unable to deliver their grain and some may end up in a financial squeeze as growers need the money to cover their costs to seed and fertilize the upcoming spring crop, Steve said.

Farmers like Greg Sears, 53, are feeling the pinch. Sears is still waiting to deliver 700 tons of malting barley, worth between $150,000 and $175,000, to his local elevator north of Grand Prairie, Alberta. Some crop producers in his area are holding off on servicing and buying new equipment, and there are dozens of unsold combines after last year’s tough harvest and a drop in grain movement, he said.

“It’s definitely sending a ripple through the entire economy,” Sears said by phone. “It’s just causing everyone to pull back the reins and consolidate positions so you can weather this storm.”

--With assistance from Divya Balji and Robert Tuttle.