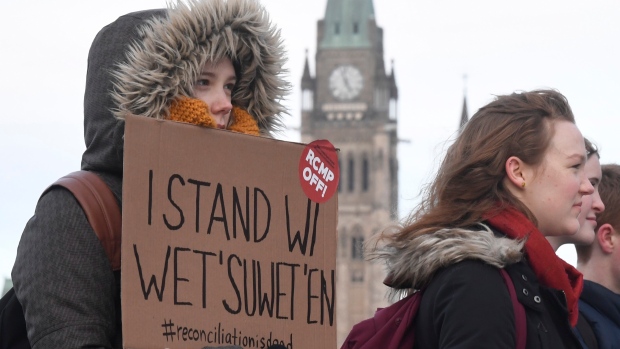 Protesters in solidarity with the Wet'suwet'en hereditary chiefs opposed to the LNG pipeline in northern British Columbia block an Ottawa intersection Wednesday, Feb. 12, 2020. Via Rail has extended train cancellations on major routes in Ontario and Quebec as protests against a pipeline in northern B.C. stretched into a sixth-day on Wednesday , THE CANADIAN PRESS/Adrian Wyld

From ongoing anti-pipeline blockades that have choked supply chains and halted rail service across the country, to the rapid spread of COVID-19, there hasn’t been a shortage of economic risks facing the Canadian economy.

In light of these events, BNN Bloomberg surveyed economists on the country’s risk for a recession this year, and the biggest headwinds and tailwinds for the economy.

“We still think the risk of a recession is relatively low even in the face of recent events. Most of the recent events that have weighed on growth, including the CN Rail strike in November, the temporary shutdown of the Keystone pipeline, severe winter weather and the rail blockades more recently should be short-lived. They weigh on growth in one quarter, but then boost growth in the next quarter. Given we need to see two quarters of falling GDP for a technical recession, these types of shocks are not normally the things we need to worry about. The coronavirus is likely to prove longer-lived than the other factors, but Canada’s direct exposures to China are still relatively small. We think that the chance of a recession this year is probably around 20 per cent.”

“The big risk in Canada is elevated levels of household debt and high debt service costs. High debt and debt service costs are unlikely to cause a recession by themselves, but they will exacerbate the negative consequences of other potential shocks. For example, if the negative effects from the coronavirus on global manufacturing are more pervasive than we think they will be, then the consequences for Canada’s economy may be worse than for other countries because workers with high debt burdens who worry about a rising risk of unemployment are likely to cut back on their spending faster and by more than they might elsewhere.”

“Immigration looks set to remain the strongest tailwind. Indeed, it is the main factor that has prevented a recession in the recent past — GDP per capita declined for two quarters running in Q4 2018 and Q1 2019, for instance.”

“The odds of a recession in Canada, while having risen recently on account of the spread of COVID-19 and transportation disruptions, are still relatively contained given that we see the latter disruptions as being temporary, with a rebound in growth occurring after they are resolved. But even then, the pace of growth is still likely to be capped given that households are spending more cautiously. We are expecting a Bank of Canada cut in April which would help cushion growth. “

“The biggest risk to Canada’s economy right now appears to be longer-than-expected disruptions from COVID-19 and transportation disruptions, and the possibility that they have a larger negative impact on business sentiment than currently anticipated. That would add to the challenges already faced by Canada’s struggling export sector.”

“Talk of a recession will become more frequent in coming weeks as 2019 fourth-quarter GDP results are released (expectations are for almost zero growth) and if monthly data shows economic headwinds extending to the first quarter of 2020. But we’re not calling for a recession this year. There is a low probability in our view. That’s in part because of a likely rebound in output and tailwinds.”

“The COVID-19 virus outbreak has potential to hurt output in the services sector, particularly in travel and tourism, but also in manufacturing as global supply chains get disrupted by virus-related shutdowns of factories in China. Blockades are also a problem and assuming they continue until the end of February, disruptions to the rail network will trim around two ticks from Q1’s annualized growth. But if, as we expect, those things are temporary, risks of recession will be low. If they are more persistent than assumed, then yes, we’ll become more concerned about recession risks. But the perennial Sword of Damocles hanging over Canada’s economy is household debt, which is restraining roughly 60 per cent of the economy.”

“Housing is an important tailwind. Recently-announced looser regulations will translate into higher allowable mortgages for Canadians, making it easier for them to purchase a home. As such, further upward pressures on resale home prices can be expected, particularly in Central Canada and most Atlantic provinces, which are already in seller’s market territory. Canada should also benefit from a resilient U.S. economy and fiscal stimulus from Ottawa and some provincial governments, including Quebec.”

“I still say the odds of recession are well over 50-50. The C.D. Howe Institute is the final arbiter of what a recession is in Canada. And every country has its own definition. C.D. Howe has four or five different definitions. I have the Rosenberg definition, which is that when you have real GDP-per-capita contracting, you’re already in some form of recession. So, I actually think if we’re not there, we’re going to get closer in the next few quarters.”

“The most important headwind is the extent to which the coronavirus impairs global growth given how Canada remains and will likely always remain a small, open, export-based economy.”

“A tailwind will be in the form of a pro-cyclical stimulative federal budget.”