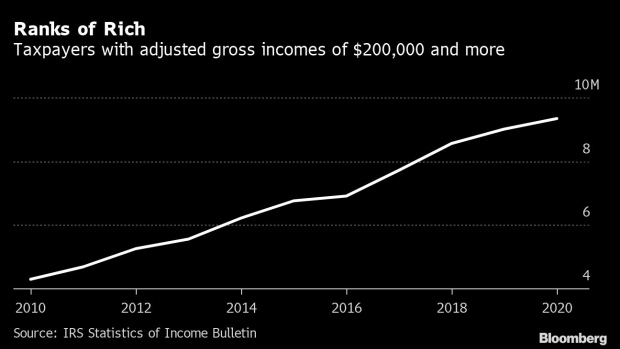 And when this herd moves, it produces dislocation. Everyone else better get out of the way, especially in terms of schools and real estate. There are waiting lists for private schools near Florida’s Palm Beach, and, as the Washington Post headlined last week, “On Martha’s Vineyard, Even the Doctors Can’t Afford Housing Anymore.”

But something didn’t quite add up in what writer Tom Wolfe once termed the plutography, or the obsessive study of the rich. The herd was on the move, yes, but it seemed as though they didn’t have specific destinations. They moved everywhere in the US, pricing up everything. The rich were buying up condos in Palm Beach and Miami, ranches in Texas and Wyoming, and houses in Hawaii.

I turned to the source of all good things, the Internal Revenue Service’s Statistics of Income Bulletin, and there was the answer.

But to my point: Proportionally, there are more rich people. And they’re all basically pursuing the same, limited amount of “Rich People Things,” whether it’s spots at prestigious schools for their children or six-bedroom mountain aeries as a third home or dinner reservations at swanky restaurants. This is what the first decade of the 21st century has wrought.

On the one hand, I want to say, “Wow, that’s great! Spread the wealth!” On the other, I think this has profound implications for the public finances of those municipalities where the winners want to live, even if only part-time. Accepting, and paying for, affordable housing is just the beginning.

Can a municipality become too wealthy for its own good? In terms of credit rating, perhaps not. This crowd surely builds a tax base. But what about in terms of quality of life?

“It’s a problem for society, when the city center becomes less diverse economically, and only those with high economic status can afford to live there,” said John Griffin, a professor of finance at the McCombs School of Business at the University of Texas at Austin, in a phone interview on Friday.

In most cases, market forces will reassert themselves, but he thought it unlikely for house prices to fall far enough in Austin -- where prices rose in some cases as much as 100% during the pandemic -- for house cleaners to afford to buy homes in the city.

And yes, said Brooke Harrington, a professor of sociology at Dartmouth College, in an interview on Wednesday. Extreme inequality does have an impact. “It’s deeply destabilizing to a functioning, modern economic society” for schoolteachers and firefighters and shopkeepers to have to live two hours away from where they work. And police who don’t live in their communities become “just functionaries. They leave at the end of the day.” And that results in problems with morale and performance.

As for the lucky residents themselves, “isolation breeds isolation,” said Harrington. “Their isolation allows them to develop some weird ideas –- such as, that they’re descended from the pharaohs.”

How the Federal Reserve’s war on inflation will affect the ranks of the rich is unknown, but I suspect, not much, and not for long. This demographic’s seemingly insatiable demand isn’t some sort of pandemic-produced aberration. There are more of them. Get used to it.