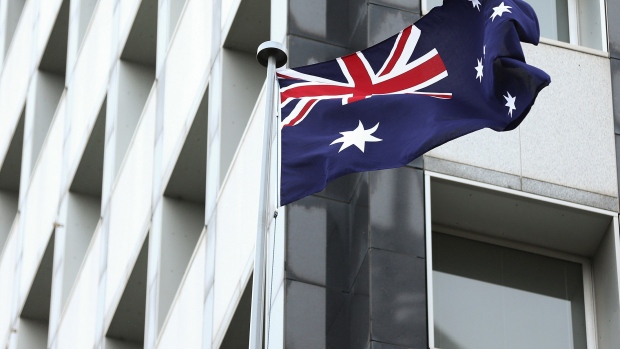 The Australian flag flies outside the Reserve Bank of Australia (RBA) headquarters in Sydney, Australia, on Monday, Dec. 4, 2017. Australia\'s central bank is on track for its longest stretch of unchanged interest rates as it bets a tightening job market will begin to put upward pressure on wages -- at some stage. , Photographer: Brendon Thorne/Bloomberg

(Bloomberg) -- Australia’s central bank said it found 10 items relevant to a Bloomberg Freedom of Information request for documents relating to unconventional monetary policy. But it’s not releasing any of them.

It wouldn’t even provide titles for nine of the documents as that would deliver “significant pointers’’ to their intended use, according to Anthony Dickman, secretary at the Reserve Bank of Australia, in an email Wednesday.

“There is one that I can tell you is titled ‘Unconventional Monetary Policy spreadsheet’,” he said.

The freedom of information request sought documents compiled since Jan. 1 on the potential implementation of unconventional monetary policy, specifically any analysis or estimates of tools that would be appropriate to the nation’s economy and financial markets. Among reasons cited for withholding them:

Earlier today, the RBA reiterated some of its thinking on unconventional monetary policy in a response to written questions from an Australian lawmaker. Dickman did provide a link to these.

To contact the editors responsible for this story: Nasreen Seria at nseria@bloomberg.net, Chris Bourke, Edward Johnson