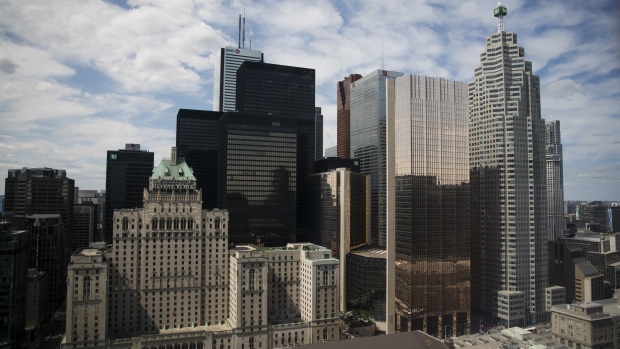 The TD building, right, stands in the financial district of Toronto, Ontario, Canada, on Wednesday, July 11, 2018.

TORONTO -- Canada's two largest banks are seeking to settle allegations that their currency traders used confidential information in chatrooms to gain potential advantage in foreign exchange transactions between 2011 and 2013.

The Ontario Securities Commission will conduct hearings Friday to determine whether it's in the public interest to approve settlement agreements between the regulator's staff and the Royal Bank of Canada along with the Toronto-Dominion Bank.

"Staff of the Ontario Securities Commission have identified many hundreds of prohibited disclosures throughout 2011-2013," said 11-page statement of allegations filed against each bank.

The statements allege confidential information, including trade sizes, timing, price, or stop-loss levels, was shared by the bank's traders with other participants in chatrooms or received to gain a potential advantage in the market over traders at other firms who did not have access to this information.

The commission noted that currency traders at both banks were involved in several large chatrooms involving traders from other international banks in addition to bilateral chats.

While exchanging "market colour" including economic analysis relating to the movement of currencies was acceptable, the OSC says traders inappropriately sought and disclosed specific transaction details to gain advantage in the market.

The OSC says the two banks failed to have sufficient supervision and controls in its currency trading business. It says compliance monitoring issues continued into 2015 despite banning multi-dealer chatrooms in November 2013.

"RBC did not sufficiently promote a culture of compliance in the FX trading business, which allowed FX traders to behave in a manner which put RBC's economic interests ahead of the interests of its customers, other market participants and the integrity of the capital markets," the regulator said in its 11-page filing.

"Failures of this nature put customers at risk of harm and undermine market integrity. TD's failures in this regard were contrary to the public interest," it added in identical statements in TD's filing.

In RBC's case, the commission said membership in some of these chatrooms was on an invite-only basis and based on members willingness to contribute to the chat.

"Participation in chatrooms with traders from other firms had a profit motive. Traders sought an advantage to make more profitable trades on behalf of their bank, which in turn would benefit the trader through performance incentives."

"Mate the only reason you're up this year is cause of my info," said an RBC trader quoted by the OSC filings.

"I agree ur tips hav been hot this year," responded the other trader.

RBC said in a statement that it is pleased to resolve the matter.

"The conduct covered by the allegations occurred many years ago, and we have taken a number of steps since that time to enhance our controls," said spokesman Andrew Block in an email.

"The statement of allegations does not assert any trading misconduct that caused harm to any specific clients."

TD responded to a request for comment with an email.

"Serving clients with excellence and integrity is at the heart of our culture and we take matters of this kind extremely seriously," the email stated.