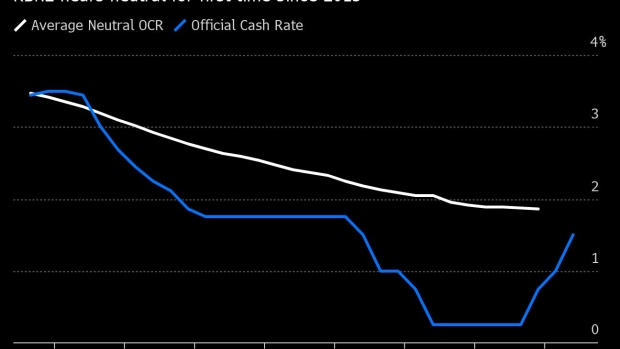 (Bloomberg) -- New Zealand’s central bank is expected to hike interest rates by half a percentage point for a second consecutive meeting as it races to a “neutral” stance where monetary policy no longer stimulates the economy.

The Reserve Bank will raise the Official Cash Rate to 2% from 1.5% Wednesday in Wellington, according to 19 of 22 economists surveyed by Bloomberg. Three predict a quarter-point move to 1.75%.

As faster inflation threatens to become entrenched, central banks worldwide are taking their foot off the accelerator as quickly as possible. The RBNZ may be the first to get back to neutral, which it last estimated to be about 2%. It will then need to consider how quickly to apply the brake on an economy that’s already grappling with falling house prices and weak consumer confidence.

“The RBNZ will, again, be leading the global central bank pack; it will be the first to contemplate what should be done with contractionary monetary conditions,” said Stephen Toplis, head of research at Bank of New Zealand.

“The response should become more cautionary once this stage has been reached,” he said. “Given that the New Zealand economy is walking a tightrope at the moment, the RBNZ will not want to be the reason it falls off.”

In its last forecasts in February, the RBNZ projected the OCR would rise gradually, reaching 3% in late 2023 and hitting a peak of 3.35% in 2024. Economists now expect the OCR to reach 3% by the end of this year, with quarter-point hikes at each of the remaining four meetings after this one.

Inflation is running at 6.9%, the fastest pace in more than 30 years, and unemployment is at a record-low 3.2%. The RBNZ last month said it wanted to move rates “to a more neutral stance sooner” to “reduce the risks of rising inflation expectations.”

Neutral policy rates have dropped markedly in recent decades due to a host of factors including globalization and aging populations. Now they may be rising as inflation expectations climb, forcing central banks to do more to keep a lid on prices.

The RBNZ’s cash rate hasn’t been at or above its estimated neutral level since 2015.

“The last published RBNZ estimate is 2%, but that’s looking on the light side given the persistent lift in inflation expectations,” said Sharon Zollner, chief New Zealand economist at ANZ Bank in Auckland.

While she expects a return to quarter-point increases from the July policy meeting onwards, if the RBNZ revised up its estimate of neutral that could be taken as a signal for a third half-point hike, she said.

The government last week announced a cash payment of NZ$350 ($226) to 2.1 million low and middle-income earners to help them cope with rising prices -- fiscal stimulus that could boost inflation in the short term.

At the same time, there are rising concerns that the economy could tip into a recession next year as highly indebted households reel from the rapid rise in mortgage rates.

The RBNZ may be in the midst of the most aggressive tightening cycle since it pioneered inflation targeting more than 30 years ago, but there’s also a chance it will begin to forecast future rate cuts in its updated OCR projections tomorrow, said Toplis.

“We will be watching the tail end of the track closely,” he said. “After all, the RBNZ will, at some stage, indicate that its actions have won the battle and that rates will need to start returning to neutral from the topside rather than the bottom.”