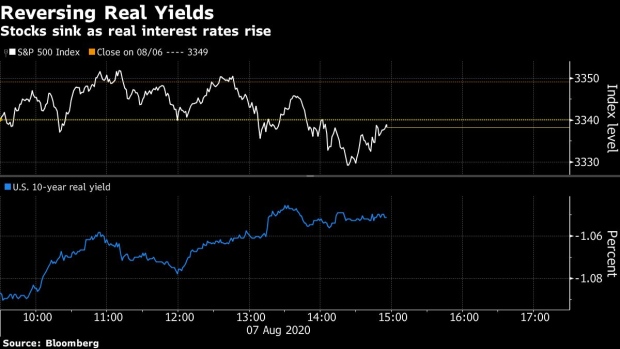 Real interest rates -- which strip out the effects of inflation -- rose by the most in a month Friday after a stronger-than-forecast July jobs report. The lurch higher from record-low negative levels helped send technology shares and gold lower, while the Bloomberg Dollar Spot Index rose in its best day since June.

However, those trends are unraveling on Friday after a string of encouraging economic releases lifted some of the gloom pinning real rates at record low levels.

“Lower yields had driven people into growth stocks, and a rise in yields is now slowing those inflows,” said Sameer Samana, Wells Fargo Investment’s senior global market strategist. “Combined with the recent run higher in gold and lower in the dollar, it all adds up to some really stretched trends that needed a breather.”

Tech shares led the Nasdaq lower by 1.3% on Friday, breaking a seven-day winning streak. Gold sank as much as 2.3% in its biggest decline since March, after hitting a record high of roughly $2,075 per ounce. Meanwhile, the dollar soared as much as 0.8%, erasing its weekly drop.

Gold’s drop in tandem with the S&P 500 as of late cast further doubt on the yellow metal’s viability as an equity hedge. Rock-bottom Treasury yields have pushed investors to consider replacing bonds with gold in traditional the portfolio mix of 60% stocks and 40% fixed-income. However, bullion’s growing correlation with stocks means that the two asset classes are moving closer in lockstep.

Additionally, the dollar’s strength post-payrolls is yet another headwind for gold, according to Evercore ISI. Fears of a stimulus-led inflation uptick had investors dumping dollars in favor of gold, but the better-than-forecast jobs print overwhelmed that narrative Friday.

“The dollar went straight up for a good reason -- a much better-than-expected payroll,” Dennis Debusschere, Evercore ISI’s head of portfolio strategy, wrote in an email. “That USD strength is pushing oil prices and copper lower and gold is following along as well.”