Canadian bank stocks could fall another 5-15% before they hit bottom: Nigel D’Souza

Canadian bank stocks slid the most in more than two years as the first round of earnings from US lenders weighed on the outlook for the financial sector amid growing fears of a recession.

Royal Bank of Canada, the nation’s largest lender, sank 5.6 per cent, the most since March 2020 when the pandemic devastated markets. It has plunged 20 per cent since its record high in January. Bank of Nova Scotia and Toronto-Dominion Bank slumped as much as 3 per cent and 2.1 per cent respectively. Canadian lenders are due to report earnings next month.

“The knock-on effect to Canada has been much more significant than I would have expected,” AGF Investments vice-president and portfolio manager Mike Archibald said in an interview. “Canadian banks are down as much or more than the US banks, more depending on which one you’re looking at. There’s a lot of uncertainty around what the economic environment could look like over the next six to 12 months.” 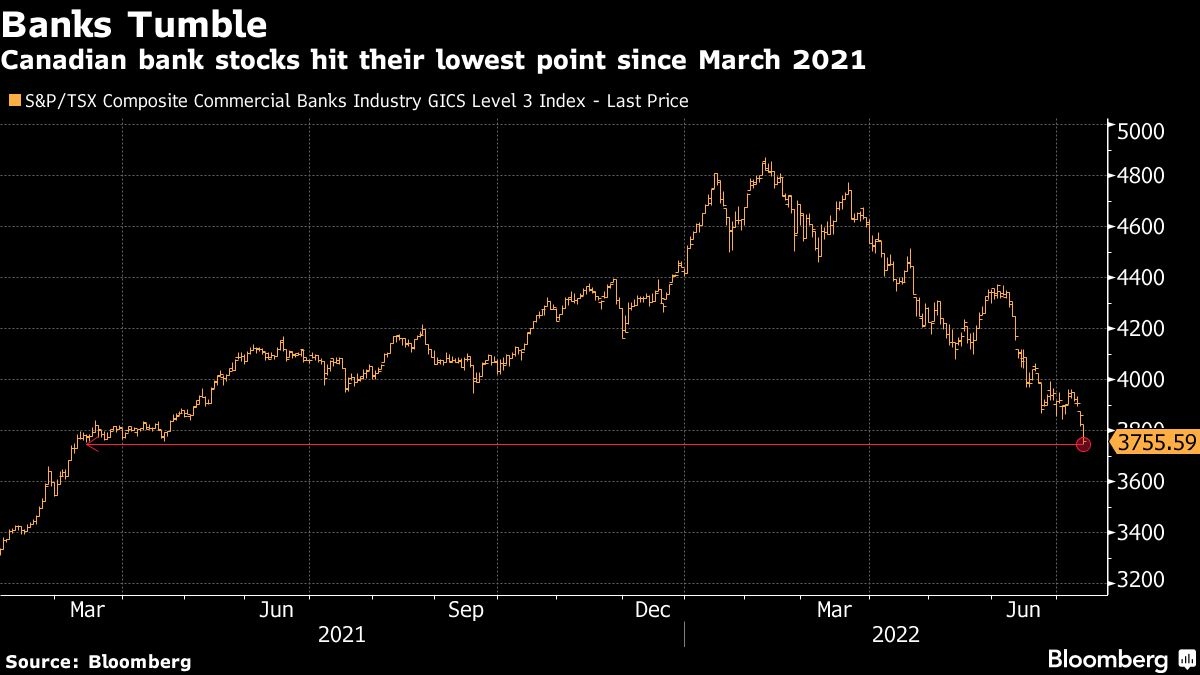 With four major US banks set to report earnings in the next few days, investors will be assessing the degree to which lenders are bracing for the downturn and potential recession -- and what that could mean for Canadian banks when they report at the end of August.

Canadian banks started the year as one of the strongest performing sectors on the S&P/TSX Composite Index, driving the market to a record high in March. Since then, fears of a recession have grown as central banks tighten monetary policy to combat accelerating inflation. That’s weighed on banks and the broader market, dragging down Canada’s equity benchmark 17 per cent since March 29.

The Bank of Canada hiked interest rates by a full percentage point on Wednesday, a surprise move to withdraw stimulus before four-decade-high inflation becomes entrenched. A report Thursday showed Canada’s manufacturing sales fell for the first time in eight months.