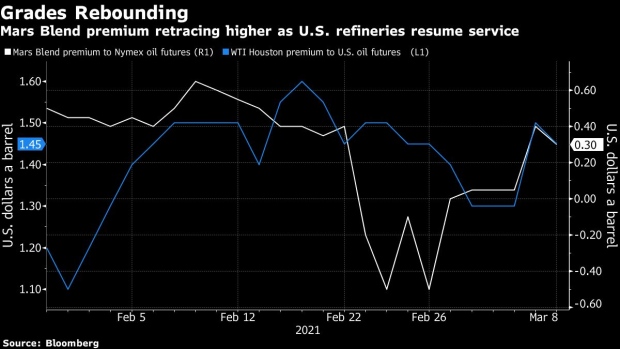 Seven of 18 refineries affected by the cold blast -- making up over 2 million barrels a day of crude processing capacity -- were operating normally as of Monday. Mars Blend, a regional sour crude benchmark, traded this month at the largest premium to Nymex oil futures in nearly three weeks, while other key grades also firmed. Another reason for the strength is due to increased demand for U.S. crude from overseas buyers after OPEC+’s surprise decision to continue limiting supply.

As much as 5.5 million barrels a day of crude processing capacity was suspended when arctic temperatures in the U.S. south halted power supply and damaged equipment at refineries in America’s energy hub in February. Crude inventories piled up by a record 22 million barrels as a result. Since then, plants including those operated by Motiva Enterprises LLC and Valero Energy Corp. have restarted, and the rest of the sites will likely resume operation this week.

Buying is popping up from South Korea, India, Canada and Europe, although interest from China has been muted because of high inventories. With OPEC producers keeping supply cuts in place in April, some customers that were expecting available supply from Middle East producers, especially of medium-high sulfur crudes, may have to seek alternatives like Mars Blend or Poseidon.

Saudi Arabia’s decision to increase official selling prices for its April supply to Asia and the U.S. could also spur additional purchases of U.S. sour crudes.