U.S. stocks dropped the most in almost three week amid growing anxiety that the spread of COVID-19 variants will upend growth expectations, undoing popular reflation trades. Treasuries gained for an eighth day.

The S&P 500 fell 0.9 per cent, with the economically-sensitive industrial and material sectors helping to lead all 11 industry groups lower. The benchmark index had set all-time closing highs in eight of the last nine trading sessions. Banks were the biggest losers with the U.S. 30-year Treasury yields fell briefly below 1.90 per cent for the first time since February.

Traders are getting edgy over whether the rapid spread of the delta strain will knock back growth and prospects for central bank normalization. 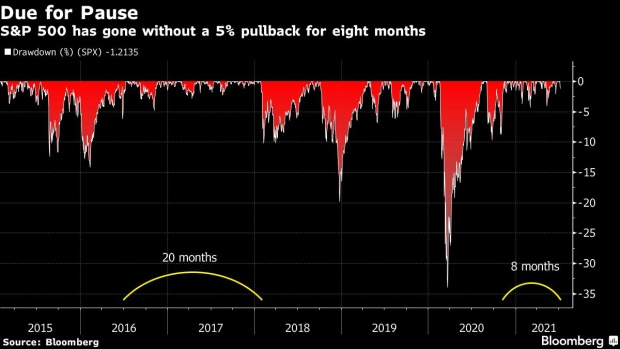 Central bank stimulus plans remain critical to the market outlook. While the Federal Reserve mulls the timetable for tapering US$120 billion in monthly bond purchases, the European Central Bank stands ready to extend ultra-loose policy. In the culmination of an 18-month review published Thursday, ECB policy makers raised their inflation target to 2 per cent and said they would tolerate moderate overshoots.

“The minutes of the Fed yesterday pointed to a slowing of the bond purchase, though the lower interest rate on the 10-year, which indicated higher demand,” said Kim Forrest, founder and chief investment officer at Bokeh Capital Partners. It “looks like the bond people are ignoring the Fed’s future moves.”