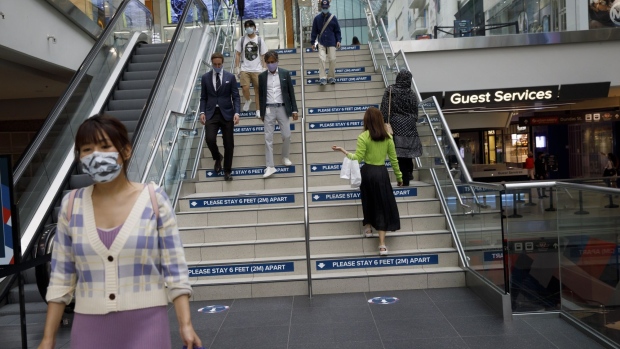 Canada’s largest commercial landlords are seeing some improvements in rent collection as tenants find ways to normalize their businesses during the pandemic.

Allied Properties Real Estate Investment Trust, which operates 200 offices and other properties in Canada’s largest cities, expects to collect about 98 per cent of rent in its third quarter as some deferrals roll off, according to Chief Financial Officer Cecilia Williams.

That’s an improvement from the second quarter, when Allied collected 94.5 per cent of the $164 million (US$122 million) in rent due, deferred 3.6 per cent of payments -- mostly from storefront retail tenants -- and forgave 1.8 per cent in collections under a federal government rent-relief program, according to a quarterly report. Williams said the level of abatements in the third quarter will be about the same, while deferrals are expected to fall.

“I expect we’ll have some deferrals still, but it won’t be as much as in the second quarter,” Williams said at Bloomberg’s Canadian Fixed Income Conference Tuesday.

The government extended its Canada Emergency Commercial Rent Assistance, or CECRA, to the end of September. For businesses that qualify, the program covers 50 per cent of rent, the tenant covers 25 per cent and the landlord “forgives” the remaining 25 per cent. Williams expects the program will be replaced.

“The government has said they are looking to implement something else,” she said. “Our working premise right now is that whatever that new program is -- and hopefully there will be details soon -- we’re assuming it won’t involve any further abatements by the landowners or by the property owners.”

SmartCentres Real Estate Investment Trust CFO Peter Sweeney anticipates third-quarter collections in the 94 per cent to 96 per cent range and “would be perhaps even higher” when accounting for deferrals.

“We’re continuing to see businesses return to whatever that new level of normalcy might be, at least in the interim,” Sweeney said.

SmartCentres, which operates more than 150 Canadian shopping centers and whose largest tenant is Walmart Inc., was working with about 850 smaller tenants under the CECRA program in the second quarter, accounting for about 5.2 per cent of the total $202 million of rent, according to its latest financial report. While the CECRA program has been a “godsend” for many businesses, Sweeney said it’s time for the abatements to end.

“It’s now appropriate to think that that six-month time frame has lapsed and perhaps there will be an alternative program soon introduced and announced by the federal government,” he said. “But it’s time for Canadian businesses hopefully to find ways of returning to some level of normalcy.”

Real estate investment trusts have been one of the hardest-hit sectors in Canada. While the broad S&P/TSX Composite Index recovered most of the losses from the pandemic and is down about 5 per cent this year, the real estate sub-index -- comprised mostly of REITs -- is down 21 per cent. Allied has lost 32 per cent so far this year, and SmartCentres is 36 per cent lower.

QuadReal Property Group CFO Tamara Lawson said collections across its portfolios, which are more heavily weighted to industrial and residential properties, have been “quite strong.” The percentage of collections in the multi-family portfolios have been in the “high nineties,” while office and industrial are in the “mid-nineties” and retail is about 70 per cent.

QuadReal, which is owned by the British Columbia Investment Management Corp. and isn’t publicly traded, doesn’t report quarterly figures. As of the end of December, 34 per cent of QuadReal’s assets were in the office sector, 31 per cent in residential and 22 per cent in industrial, with about 8 per cent in retail.

Lawson said QuadReal has been supporting tenants that are eligible for the CECRA program, which has “also helped on the collections front for smaller tenants.”