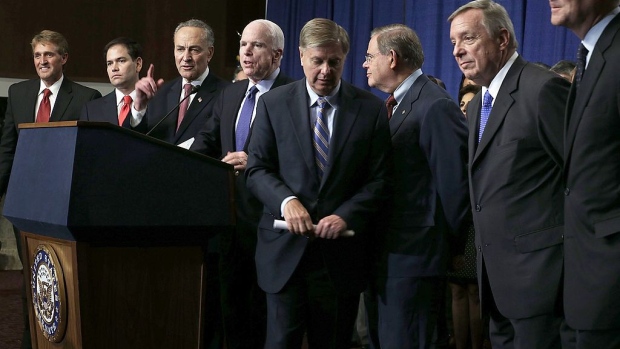 (Bloomberg Opinion) -- There was a rosy scenario about immigration reform, before November, that went something like this: Republicans would lose both the White House and congressional seats. Cast out of power, they would once again look up to find the Sword of Demographics hovering above their grey heads. This time, Republicans would be scared enough to act — ignoring the howls of their nativist base and cutting a deal on immigration.

Republicans did, of course, lose the White House. But the optimistic case may prove even less realistic than it did in 2013, when a super-majority passed immigration reform in the Senate before Republican Speaker John Boehner strangled the legislation in the House. Why are prospects worse now? The willingness of scores of Republican leaders and millions of Republican voters to wallow in a demagogic fantasia about President Donald Trump’s triumphant reign being cut short by conspiracy and theft does not bode well for the future of compromise — immigration compromise especially.

The GOP’s uninhibited attacks on Black votes have made clear once again that White nationalism is the flag under which the party rallies its troops. And White rage and immigration flows make for a volatile cocktail.

Other than Trump family profiteering, immigration policy was arguably the most coherent element of Trump’s presidency. With more than 400 executive actions, Trump pursued one clear goal: to restrict both legal and illegal entry into the U.S. Some of the administration’s acts were barbaric; few were half-hearted or ambivalent.

President-elect Joe Biden has vowed to end Trump’s “unrelenting assault on our values and our history as a nation of immigrants.” He has committed to spend political capital to “finally deliver immigration reform.” But no amount of capital may sway Republican congressional leaders. The party’s inability to cope with election loss — if anything, Trump’s defeat has produced an uptick in already dangerous levels of mass delusion — suggests it is not ready to embrace the multi-racial future for which immigration is both engine and symbol.

Biden can undo Trump’s executive actions with some of his own, says veteran immigration advocate Frank Sharry in an email. “Such a path is more vulnerable to legal challenge before conservative judges, and not as permanent as legislation,” he notes. “But a lot can be done.”

Biden has called for repeal of the travel ban on nationals from Muslim-majority countries and changes to the Trump administration’s definition of which immigrants would constitute a public charge. He would end Trump’s policies of intentional cruelty, including family separation and the Remain in Mexico program that strands asylum seekers in sometimes dangerous conditions while they await relief that rarely comes. He would bolster the Deferred Action for Childhood Arrivals program, which would enable millions of DACA-eligible youth to remain in the U.S., at least until the next twist in this economically destructive and inhumane saga.

Without full Democratic control of Congress, however, it’s hard to see how Biden can push through legislation to grant a pathway to citizenship for more than 10 million undocumented immigrants or engineer the kind of reforms to visa programs that can boost U.S. competitiveness.

Yet Sharry insists there is cause for optimism. “Remarkably, Trump’s signature issue has ended up forcing Americans to choose whether we want to be a welcoming country or a cruel one towards immigrants and refugees. The good news: Most have come down on the side of being welcoming,” Sharry says. “Immigration as a wedge issue is losing its edge.”

Francis Wilkinson writes about U.S. politics and domestic policy for Bloomberg Opinion. He was previously executive editor of the Week, a writer for Rolling Stone, a communications consultant and a political media strategist.