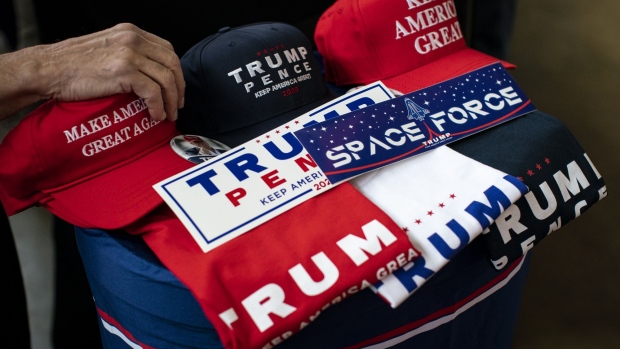 Campaign merchandise is displayed for sale before a rally with U.S. President Donald Trump in Charlotte, North Carolina, on Monday, March 2, 2020. , Bloomberg

The Republican National Committee will hold a scaled-down version of its convention next month in Jacksonville, Florida, as cases of the coronavirus spike in the state and some officials said they would not being going out of concern for their safety.

For the first three days of the event, only party delegates will be allowed to attend. On the final day of the four-day event, when Donald Trump accepts the party’s nomination for president, the RNC will allow delegates, their guests and alternate delegates to attend, RNC Chairwoman Ronna McDaniel wrote in a letter Thursday to members.

“We plan to utilize a number of indoor and outdoor venues in this multiblock radius of Jacksonville, including the VyStar Veterans Memorial Arena, TIAA Bank Field, Daily’s Place Amphitheater, 121 Financial Ballpark, and several others,” she wrote.

Florida has seen a resurgence in coronavirus cases. It reported 301,810 cases on Wednesday, up 3.5 per cent from a day earlier, compared with an average increase of 4.5 per cent in the previous seven days. Deaths reached 4,521, an increase of 112, or 2.5 per cent.

Since Iowa Senator Chuck Grassley, 86, said last week that he would not attend the Republican convention, five other senators have said they also will not be going to Jacksonville, which had nearly 14,000 coronavirus cases in the county as of Wednesday. At least eight other senators have not committed.

A smaller convention is the latest blow to Trump’s campaign season aspirations. The event was originally scheduled to be held in Charlotte, North Carolina, but that state’s governor refused to commit to easing limits on crowd size. Last month, Trump held his first rally in months in Tulsa, Oklahoma, but was greeted by an underwhelming crowd.

McDaniel, in her letter, said that safety measures for the convention will include temperature checks, available personal protection equipment, “aggressive sanitizing protocols” and COVID-19 tests.

“I want to reiterate that the RNC is working around the clock to ensure the convention celebration in Jacksonville is still an exciting, premier event,” McDaniel wrote.