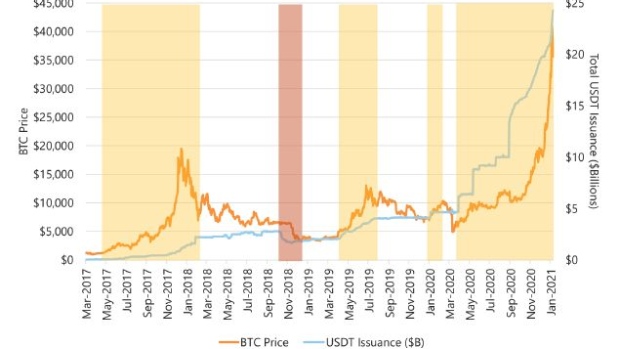 (Bloomberg) -- In 2017, Alex Pickard had made so much money from Bitcoin that he quit his job in finance and moved to Washington state to mine digital coins full time. Less than a year later, the venture had failed and he was back at quant firm Research Affiliates.

Citing his own cautionary tale, the vice president of research has a warning for all the new crypto diehards: the market is likely being manipulated.

“Perhaps BTC is just a bubble driven by a frenzy of retail, and some institutional, money eager to get a piece of the action,” Pickard wrote in a report titled “Bitcoin: Magic Internet Money” posted on the Research Affiliates website. “Alternatively, and far likelier in my opinion, is that this ‘bubble’ is more fraud than frenzy.”

A 2019 report by finance professors John Griffin at University of Texas at Austin and Amin Shams of Ohio State University -- titled “Is Bitcoin Really Un-Tethered?” -- points to patterns between Bitcoin’s price and issuance of Tether. The professors theorize that one large trader prints unbacked Tether coins that are then swapped for Bitcoins, which artificially create the demand driving prices higher.

The relationship between Tether and Bitcoin is a matter of hot debate in the crypto world, and some market participants argue that the correlation between the two coins doesn’t indicate anything nefarious.

Tether Operations Ltd., which manages the platform and facilitates transactions in the currency, rejected the researchers’ claims. “Reports of manipulation of crypto markets by Tether are predicated on a paper that has been roundly discredited,” wrote General Counsel Stuart Hoegner in an email to Bloomberg. “Multiple other researchers have found, using superior methodologies, that there is no causal relationship between the issuance of Tethers and market movements up or down.”

He added that Tether is always backed by traditional currency and cash equivalents, and that the rally in Bitcoin is being driven by more institutional investors buying into the market. In April, an academic study found no systematic evidence of stablecoin issuance driving cryptocurrency prices.

“Issuance behavior can be explained as maintaining a decentralized system of exchange rate pegs and acting as a safe haven in the digital asset economy,” wrote the authors Richard Lyons at the University of California, Berkeley and Ganesh Viswanath Natraj at the University of Warwick.

Many of the major cryptocurrency exchanges such as Binance use Tether, saying it helps provide liquidity and can be used to facilitate transactions between different digital coins and tokens. Unlike other currencies such as Bitcoin that are “mined,” Tether officials say they create new coins based on customer orders.

Tether is not new to controversy. Last year, New York Attorney General Letitia James went after iFinex Inc., which runs the Bitfinex trading platform, and the issuer behind Tether, claiming they hid a loss of about $800 million of comingled client and corporate funds. The companies have denied the allegations. Bitfinex faces a Jan. 15 deadline to submit papers related to the case.

To Pickard at Research Affiliates, the allure of cryptocurrency gains doesn’t outweigh the risks, and he raised a broader critique of the industry. “It is not a vehicle for investment, not a store of value, and not an inflation hedge,” he wrote.

His skepticism fits into the philosophy of Research Affiliates, which is usually on the side of ringing alarms about bubbles from Tesla Inc. to short-volatility bets. The Newport Beach, California-based invesment firm is known as a pioneer in the field of smart-beta and about $145 billion is invested using their strategies.

In 2018, founder Rob Arnott co-authored a paper that compared cryptocurrencies to the dot-com mania and cast doubt over their ability to ever become money for transactions.

“If the market manipulation story is true, then BTC is not in a bubble in the traditional sense, but is in the midst of something that could be much worse,” said Pickard.