U.S. retail sales picked up in March, helped by a surge in gas station receipts that masked mixed results in other large spending categories as consumers contend with decades-high inflation.

The value of overall retail purchases climbed 0.5 per cent, Commerce Department figures showed Thursday. While that was just shy of expectations, the prior month was revised up sharply to show a 0.8 per cent increase.

The March advance was led by an 8.9 per cent jump in spending for gasoline. Excluding receipts at gas stations, sales fell 0.3 per cent last month as vehicle and e-commerce purchases -- the two-largest spending categories -- declined. The figures aren’t adjusted for inflation. 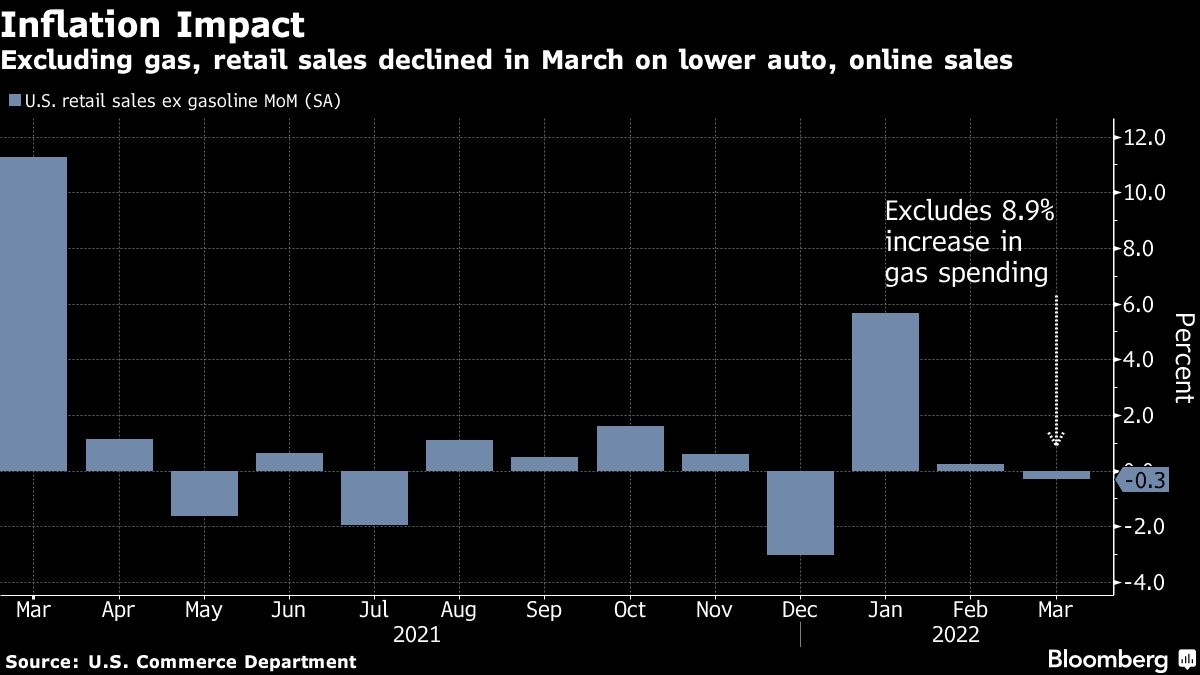 “In some discretionary categories, such as apparel and restaurant spending, the rise in nominal sales outstripped inflation and suggested that the easing in pandemic-related restrictions is helping consumer spending, while in other components it was clear that inflation played a large role in boosting spending,” Omair Sharif, founder of Inflation Insights LLC, said in a note.

After the largest monthly percentage increase in average gasoline prices in six years, and along with rising food and shelter costs, Americans have tougher spending choices to make beyond essentials. Russia’s war in Ukraine is driving up costs for energy and commodities, adding to rampant inflation that’s crumbling purchasing power.

There are other signs that that’s already happening. Retailers like Bed Bath & Beyond Inc. blamed slowing sales on inflation that’s hurting consumer confidence, and and grocery chain Albertsons Inc. is bracing for less spending by lower-income customers as food prices surge.

A report Tuesday showed consumer prices rose 1.2 per cent in March from a month earlier, underscoring the painfully high cost of living and reinforcing pressure on the Federal Reserve to tighten policy even more aggressively. Data out Wednesday showed producer prices also rose notably, which will feed through to consumers even more.

Still, household balance sheets remain healthy by several measures, with the unemployment rate near the lowest in five decades at 3.6 per cent and elevated savings throughout the pandemic.

Receipts at grocery stores increased 1.3 per cent, which may have reflected a pickup in food prices. Restaurant sales, the report’s only services component, increased 1 per cent after a 3 per cent gain. Some eateries are removing more expensive menu items and promoting deals in response to consumers feeling the squeeze of inflation.

Still, dining out will be one of the first luxuries to go for price-conscious consumers, as well as impulse purchases, driving and other experiences, according to a nationally representative survey conducted by the Harris Poll for Bloomberg News. The poll found about 84 per cent of Americans plan to cut back on spending as a result of higher prices.