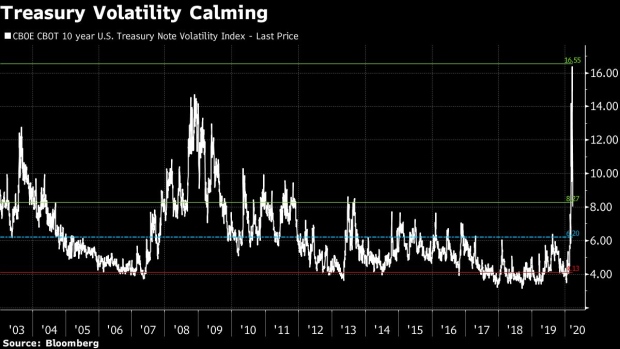 (Bloomberg) -- Markets roiled by indiscriminate liquidations are showing the first signs of calming, as volatility in the world’s safest assets eases.

A measure of swings in the Treasury market is in the biggest four-day decline on record as it plunges from an all-time high set last week. That Treasuries were not immune to the pan-assets sell-off even after the Federal Reserve slashed interest rates to zero epitomized how the need to boost cash positions resulted in a fire sale of parts of the market that are supposed to hold up in times of stress.

For risk bulls, the modicum of calm that is returning to havens is a constructive sign, at least a step toward markets normalizing. Throughout the market turmoil, UBS head of derivatives research Stuart Kaiser has been highlighting how sky-high haven volatilities are an impediment to any possible bottoming process in risk assets.“If those safe haven assets can’t calm down it’s almost impossible to see equity markets stabilize,” he said in a recent interview on Bloomberg TV. There’s been “significant improvement” in these as well as other key risk metrics as of late, he wrote in a note published Wednesday.

The Cboe/CBOT 10-year U.S. Treasury Note Volatility Index, or TYVIX ended Thursday at an all-time high of 16.39, a level nearly five standard deviations high relative to the average in its more than 17-year history. The four-day collapse in TYVIX of -8.4 is also its largest on record, as of 10:20 a.m. New York time.

The index tracks the implied volatility of the world’s pre-eminent fixed income product over the next 30 days using out-of-the-money option prices in the same way the VIX Index, the equity market’s so-called “fear gauge” does for the S&P 500 Index.

In addition, the implied one-month swings in U.S. dollar-Japanese yen cross -- a pair comprised of two of the safest currencies -- has nearly halved from its 2020 peak on March 9.

“We view stable safe haven assets, such as TYVIX staying in the 6-8 range, as a necessary condition for a sustained equity recovery but credit risk as the primary tactical risk facing markets,” concluded Kaiser.