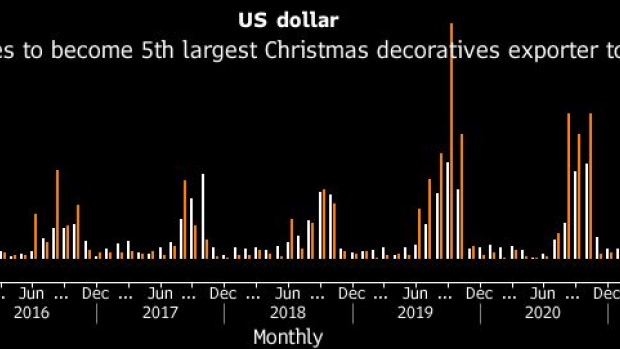 Shipping containers stacked at the Jawaharlal Nehru Port in Navi Mumbai, Maharashtra, India, on Sunday, Nov. 14, 2021. Congestion at many of the world’s major ports offered a snapshot of supply chains trying to avoid unprecedented bottlenecks, as cargo handlers searched for the quickest way to route goods through the clogged arteries of global commerce. , Bloomberg

India, believed by many to have the potential to become the next China, is finally making headway in the exports market as it broke into the top 5 suppliers of Christmas decorative items and t-shirts to the US.

Sea-borne shipments of festival goods and accessories to America touched $20 million last month, almost triple the value from the year-ago period, according to US customs data. In the process, India gained a clear lead over the Philippines as buyers diversify supply sources in the face of rising labor costs and disruptions from China’s strict Covid-zero policy.

One such beneficiary of the early Christmas present is Amit Malhotra, whose Asian Handicrafts Pvt. supplies decoration items to global brands such as Walt Disney Co., London’s Harrods, Target Corp. and Dillard’s Inc. He confirmed a 20% jump in orders compared to a year ago, and that he has bumped up production capacity.

The trend isn’t limited to Christmas goods. Exporters in Asia’s third-largest economy have been witnessing a significant increase in orders from both the US and Europe, with the shift mostly seen in low-cost, labor-intensive sectors such as apparel, handicrafts and non-electronic consumer goods. While diversification of supply chains began with the US-China trade war in 2018, India hadn’t seen any meaningful gains back then as countries such as Vietnam cornered the bulk of orders that were moving away from Beijing.

The pandemic, which saw China adopt strict lockdowns, is helping change that. India’s goods exports, which touched $420 billion in the fiscal year ended March, have already reached close to half that level in the five months beginning April. While that’s hardly worthy of comparison to China’s annual $3.36 trillion of exports, analysts view it as a good starting point for the sub-continent’s largest economy, which is currently growing at the world’s quickest pace.

“Taiwan, the EU, the US, Japan -- all are willing to give India a second look,” said Alex Capri, a research fellow at Hinrich Foundation, set up by US entrepreneur Merle Hinrich to promote sustainable global trade.

Indian government data showed Christmas decoration exports in the year ended March increased more than 54% from fiscal year 2020 levels, while handicraft exports witnessed a jump of around 32% during the same period.

China’s continued decoupling from the global economy along with post-pandemic recovery presenting an opportunity for India to accelerate its investment in longer-term competitiveness and prioritize ‘winnable’ sectors, Siddharth Jain, a partner in the operations and performance practice at Kearney, said. By 2030, India is projected to have the world’s most abundant labor force, and could contribute over $500 billion annually to the global economy, according to a report by Kearney and the World Economic Forum.

“We have started to see green-shoots of this with India’s exports in FY22 reaching around $420 billion, far higher than earlier years,” Jain said. “This was driven by a combination of external as well as internal factors.”

India also managed to surpass El Salvador to become one of the top 5 suppliers of cotton t-shirts to the US this year.

The apparels sector, where India competes with nations like Bangladesh, saw an up-tick owing to multiple factors including a ban of all cotton products from China’s Xinjiang region over alleged ill-treatment of its ethnic Uighur Muslim minority, said Gautam Nair, managing director at Matrix Clothing Pvt., a medium-sized garment export firm. “The surge also further accentuated due to huge boom in buyers’ purchase and supply chain diversification.”

Medium- and large-export firms saw a jump of 30%-40% in their order books last fiscal year and the upswing would be more visible in the current financial year ending March 2023, Nair said. Matrix Clothing, which exports apparels to global brands including Superdry, Ralph Lauren, Timberland, and Napapijri, has seen orders climb by 45% last fiscal year compared to the pre-covid year.

Still, there are hurdles to the growth of low-value added manufacturing in the form of non-labor costs, warn analysts.

“The bigger problems are the legacy issues of contract enforcements, tax transparency etc.,” said Priyanka Kishore, an economist at Oxford Economics. “These do pose a challenge to India’s manufacturing ambitions and need to be addressed for the country to fully tap its potential as a manufacturing hub.”