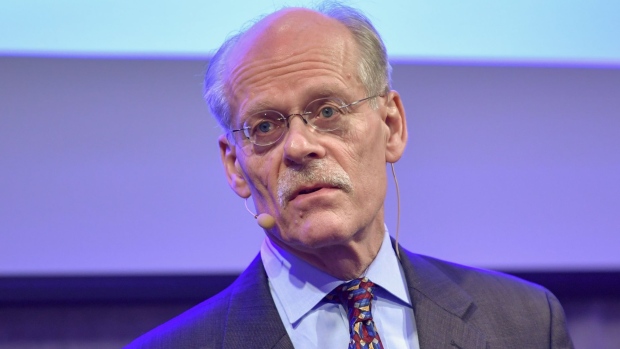 Stefan Ingves, governor of the Sveriges Riksbank, speaks during a news conference at the Swedish central bank headquarters in Stockholm, Sweden, on Thursday, Dec. 19, 2019. Sweden's central bank ended half a decade of subzero easing in a move that will provide relief to the finance industry and a test case for global counterparts experimenting with negative borrowing costs. Photographer: Mikael Sjoberg/Bloomberg , Bloomberg

(Bloomberg) -- Riksbank Governor Stefan Ingves and his deputy directly hold stock in Swedish companies whose bonds have been bought by the central bank’s asset-purchase program, an overlap that some ethics experts say shouldn’t be allowed.

Both Ingves and First Deputy Governor Cecilia Skingsley own shares in a number of firms whose corporate debt is eligible for acquisition under a quantitative-easing initiative they unveiled last year, according to their most recently released filings submitted to parliament.

The holdings are mostly in large publicly-traded companies, and each of their portfolios totals about half a million kronor ($58,000). Ingves is the only official to have reported a change in share ownership in the past two years, relating to a single holding of SAS stock.

Stock trading revelations preceded the resignation of two Federal Reserve presidents last month, and a move by the Fed to ban such activity. Riksbank officials should be subject to similar rules, according to Norman Eisen, a senior fellow in Governance Studies at Brookings and a former White House ethics czar under President Barack Obama.

“I do not believe central bankers should hold individual stocks as a general matter of ethics best practice,” he said in response to questions from Bloomberg. The Riksbank “should follow the same course as is recommended in the U.S. and provide that its officials may only hold widely-traded, diversified mutual funds, with appropriate blackout periods.”

Details of Riksbank officials’ shareholdings were previously reported by Svenska Dagbladet. A spokesman for the Riksbank referred Bloomberg to the institution’s supervisory General Council for comment, on the basis that it monitors the central bank’s activities.

Susanne Eberstein, chair of the council, said that the board only determined the framework and criteria for corporate bond purchases and that the two officials weren’t directly involved in deciding which companies would be impacted.

“One could discuss if they should have sold when they became aware of what companies whose bonds would be purchased, but that may have been worse than just sitting on their hands,” she said. “I think we in the General Council can be satisfied since they have in no way been involved in exactly what companies are eligible.”

The existing ethics regime is currently being reviewed, Eberstein added. “There is reason to consider this in the ongoing revision of the ethical regulations,” she said.

Riksbank rules don’t prohibit the ownership of shares. The filings show that Ingves and Skingsley are the only members of the six-strong board at the central bank to hold individual stocks, while the other four either declared interests in mutual funds or no financial assets at all.

Most of the shares held by Ingves and Skingsley are Swedish large caps with investment-grade ratings, meeting the criteria stipulated under the Riksbank’s 700-billion-kronor bond-purchase program, which branched out last year into corporate debt.

The central bank has already bought bonds issued by some of the companies -- including truckmaker Volvo AB, telecoms group Telia Co AB and paper maker Svenska Cellulosa AB, and could still add others to the list before the program expires by the end of this year.

In the U.S., Fed Vice Chair Richard Clarida traded between $1 million and $5 million out of a bond fund into stock funds one day before Chair Jerome Powell issued a statement flagging possible monetary-policy action as the pandemic worsened, his 2020 financial disclosures showed.

The Riksbank “should follow the same course as is recommended in the U.S. and provide that its officials may only hold widely-traded, diversified mutual funds, with appropriate blackout periods,” Eisen of Brookings said.

Current guidelines at the Swedish central bank do recommend that employees refrain from investing in “credit institutions active in Sweden or in companies included in the same corporate group as such institutions.”

“It is important to maintain a comfortable distance from the unlawful and ethically unacceptable, that is, to be aware that some things are not appropriate even if they are not expressly forbidden,” its basic principles state.

Such principles don’t go far enough, according to Lars Jonung, an economics professor at Sweden’s Lund University, who says one way to ensure probity would be for board members to put investments into blind trusts. Less stringent alternatives would at least improve perception of the central bank’s adherence to ethics, he said.

“A simple way to strengthen the credibility of the Riksbank’s Executive Board is for the members of the board to invest their savings only in equity or bond funds and thus avoid individual shares or bonds,” Jonung said in an interview. “Such a rule can easily be introduced in the current ethical rules.”