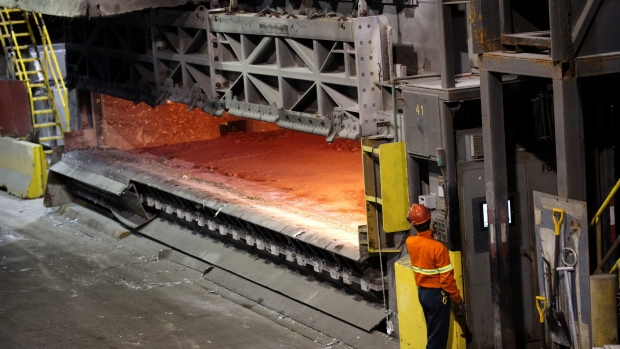 An employee closes a furnace before casting a mold for aluminum billets at the Rio Tinto Plc DC45 Casting Centre at Complexe Jonquiere in Saguenay, Quebec, Canada, on Thursday, June 21, 2018. This picturesque corner of French-speaking Canada epitomizes the potential fallout of a trade war after the Trump administration's shock move to tax Canadian metal on the pretext of national security. Photographer: Christinne Muschi/Bloomberg , Bloomberg

(Bloomberg) -- Rio Tinto Plc. workers went on strike at an aluminum smelter in British Columbia on Sunday over labor contracts with the company, their union said in a release.

About 900 Rio Tinto workers at smelting facilities in Kitimat were on strike as of 12:01 a.m. Pacific time Sunday, Unifor said in a release posted on the union website.

“Our union is fully prepared to defend our members’ rights and protect good jobs in Kitimat now and in the future,” Jerry Dias, Unifor national president, said in the release.

The union’s bargaining committee negotiated until the strike deadline at midnight, Unifor said, accusing the company of violating existing contracts by using contractors and temporary employees and failing to address concerns over pensions and retiree benefits.