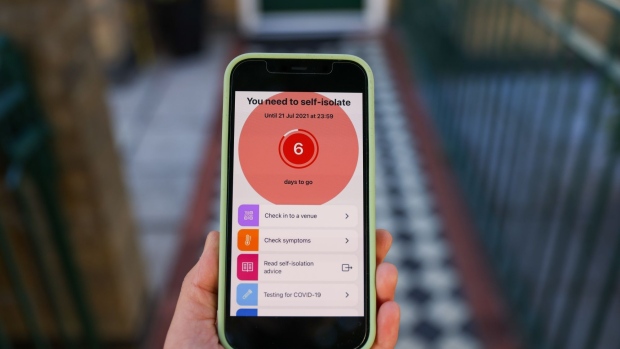 A "You need to self-isolate screen" on the NHS Covid-19 app on a smartphone arranged in London, U.K., on Friday, July 16, 2021. U.K. ministers are racing to change the rules on self-isolation after a surge in alerts from the country’s Covid-19 app takes people out of their workplaces and disrupts business. Photographer: Hollie Adams/Bloomberg , Bloomberg

(Bloomberg) -- Almost 690,000 people in England and Wales were told to isolate by the official Covid-19 mobile phone app in the week ending July 21, illustrating the pressure on key industries as staff shortages brought some supply chains close to breaking point.Contact-tracing “pings” from the National Health Service app were up 11% from 620,000 the week before, though the rate of increase slowed. The number of venue “check-ins” recorded by the app fell to 6.7 million from 10.4 million.

The legal requirement for hospitality and other businesses to display QR “check-in” codes was removed on July 19, but the dramatic decline in the data also suggests some people are choosing to disable or not use the app, after recent surveys showed a rise in deletions.Fears U.K. Public May Be Deleting Covid App to Avoid Isolating

Food and logistics companies have warned of critical shortages of workers in recent weeks, and ministers have allowed limited numbers to avoid the 10-day self-isolation to ensure services can keep running. The government is also planning to exempt anyone who’s fully vaccinated from Aug. 16.

Carmakers on Thursday urged Prime Minister Boris Johnson to make their workers exempt from quarantines as self-isolation rules exacerbated labor shortages that are hampering production. Automakers in the U.K. produced 69,097 cars in June -- the second-worst total for the month since 1953, the Society of Motor Manufacturers and Traders said.

But the pressure on industry could soon ease amid a significant fall in Covid cases that is not yet reflected in the app data for England. The number of “pings” in Wales decreased slightly in the most recent numbers.

After a two-month surge in infections driven by the highly transmissible delta variant, the number of people testing positive for coronavirus is now declining. Daily cases increased slightly to 27,734 on Wednesday, after falling for seven days. Still, that’s about half the recent peak of 54,674 recorded on July 17.

The improvement has been a welcome surprise for politicians and scientists, after Health Secretary Sajid Javid warned that cases could reach 100,000 a day in August. But the government has cautioned that the pandemic is not over, with 91 deaths reported on Wednesday and more than 6,000 Covid-19 patients in the hospital.Experts say the impact of the lifting of restrictions on July 19 has not yet filtered though to daily case data, and the full picture will not become clear until later in August. The lag between contracting coronavirus and becoming seriously ill also means pressure on hospitals is likely to persist.