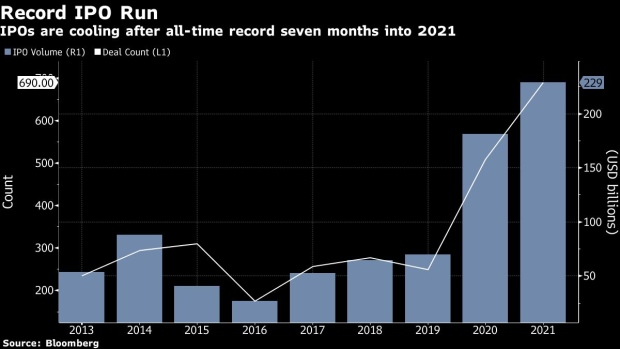 (Bloomberg) -- Sometimes all it takes to tip the market over from hot to overheating is just one deal.

Following a yearlong streak of blockbuster capital markets transactions, bankers may finally get a breather after Robinhood Markets Inc.’s muted initial public offering and rock slide of a trading debut.

The trading platform’s $2.1 billion IPO opened flat in New York on Thursday before closing 8.4% below the offer price. The cooling market prompted at least three listing candidates to delay debuts intended to raise close to a combined $3 billion this week.

Just seven months into the year, U.S. IPO volume has reached a record of more than $231 billion, topping 2020’s $180 billion total, according to data compiled by Bloomberg. While about half of this year’s volume came from the boom in special purpose acquisition companies, 2021’s total still beats every previous year with SPACs excluded, the data show.

Investors have gotten more selective after looking at more than 690 deals this year. That showed in recent IPOs performances -- even deals that rose on the first day have tended to flatten within the first month.

“There’s is a little bit of an investor fatigue right now,” Nelson Griggs, president of Nasdaq Stock Exchange, said in a Bloomberg TV interview. “There’s a case to make about a time out right now but probably short term.”

Dole Plc, after postponing its IPO and then shrinking its target, priced its shares at the bottom of a lowered range on Thursday, Bloomberg News reported.

Not every deal is suffering and the stay-at-home trend is still very much alive as Covid cases rise in the U.S. and indoor mask mandates are reimposed.

Barbecue grill maker Traeger Inc. rose 22% in its Thursday debut after pricing its IPO at the top end of a marketed range to raise $424 million. Rival Weber Inc., now on the road meeting investors for a share sale that could raise as much as $797 million, is expected to start trading next week.

August, typically the trough of the summer vacation slowdown, will be short on listings, Griggs said. He said deal activity is expected to pick up after September as long as investor interest returns.

“We’ll go anytime they’re ready but it takes the investors to be there with us,” Griggs said.