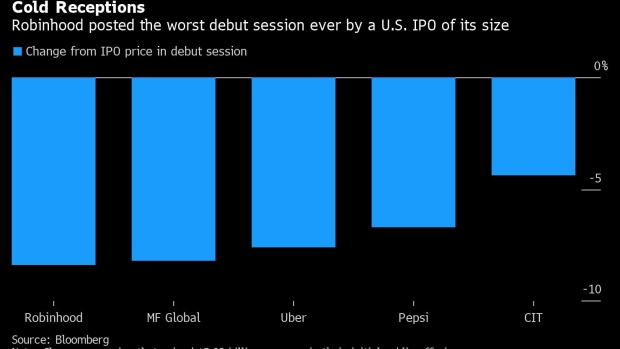 People wait in line for t-shirts at a pop-up kiosk for the online brokerage Robinhood along Wall Street after the company went public with an IPO earlier in the day on July 29, 2021 in New York City. Robinhood Markets Inc. shares fell about 5% during its Nasdaq debut. , Photographer: Spencer Platt/Getty Images

(Bloomberg) -- It was supposed to be a triumph for today’s memeified markets -- a validation for all those amateurs who took on the Wall Street pros.

Instead, the public debut for Robinhood Markets Inc. turned out to be an embarrassment for the company that’s become synonymous with the rise of individual investors.

Robinhood traders, it turned out, had no time for Robinhood.

In fact, some of the very people who flocked to the firm’s free-trading app to buy meme stocks like GameStop Corp. and AMC Entertainment Holdings Inc. this year appeared to take glee Thursday as the company’s share price slid.

Reddit’s WallStreetBets forum, a hotbed of retail traders, lit up. One top post: “Is it me or does anyone else get pleasure from watching Robinhood’s stock burn to the ground?”

Almost nothing seemed to go right for Robinhood, whose decision to briefly freeze trading at the height of the meme-stock frenzy in January drew scorn from its own customers. The stock was priced late Wednesday at the low end of its expected range. Then investors saw red instead of green: shares almost immediately dropped after trading opened, tumbling as much as 12%.

Robinhood eventually pared the worst of the decline, falling 8.4% to close at $34.82. Still, it ranked as the worst debut on record among U.S. firms that raised at least as much cash as it did. The near-immediate flop raises fresh doubts about the company’s fraught path to its initial public offering, which was full of fits and starts as it raced to seize an exuberant stock-market moment before it passed.

It’s also a potential warning sign about Robinhood’s relationship with its own users. It sought to share the spotlight with them -- upon logging in on Thursday, customers received a special thank-you message from the firm in honor of its IPO, with a virtual bell they could ring by shaking their iPhones. Instead, they failed to rally around the company at its biggest moment yet. Some turned their backs entirely to its mission to “democratize finance.”

“With the whole GameStop and AMC stuff, I’m guessing the CEO said he needed to step his game up but it’s too late for that,” Julian Barrios, a 26-year-old mechanic from Fort Lauderdale, Florida, said in an interview. “I won’t be buying any Robinhood shares -- they don’t deserve my money.”

A spokesman for Robinhood declined to comment beyond the company’s public statements.

In the days leading up to the IPO, Robinhood’s leadership put on a confident public face. The company took the unusual step of holding a live-streamed roadshow, during which the group fielded a range of questions. Chief Executive Officer Vlad Tenev smiled as he was asked which planet was his favorite.

Even on Thursday, inside Nasdaq’s headquarters, Robinhood’s team stood atop a bright green carpet rolled out for the occasion. The co-founders, Tenev and Baiju Bhatt, had their families and co-workers beside them, exchanging hugs and shaking hands between photo-ops. Robinhood bought three hours of advertising in New York’s Times Square, with billboards lit up in green with white lettering which read: “Welcome to the new Wall Street.”

Yet on old Wall Street, bankers were growing increasingly skeptical that Robinhood had enough fuel to go “to the moon” like GameStop and AMC.

Underwriters signaled during the roadshow that they wanted to be conservative with pricing, people familiar with the matter said on Thursday morning. They didn’t have as much visibility as usual into how the shares would trade at the open because of the large retail allocation of 20% to 25%, the people added.

Robinhood’s IPO also came after an 18-month run of record issuance. Not long after Robinhood priced at the bottom of its range, car battery maker Clarios International Inc. postponed its own IPO, citing “market conditions.”

Still, Robinhood’s underwriters pushed forward. First, they hinted that they wouldn’t raise the range of $38 to $42. Then, they indicated the shares would price at the bottom half of that range.

By the time Thursday came around, bankers were simply trying to not have Robinhood break its $38 IPO price on the first day. They failed: the stock sank almost immediately.

Of course, a weak IPO won’t necessarily torpedo a firm’s long-term prospects. Technology issues on Nasdaq kept Facebook Inc. shares from opening on time when it debuted in 2012, in an IPO that was widely viewed as a flop. That did little to stop the company from rocketing to a market value of more than $1 trillion today.

Robinhood’s rocky start is also a letdown for some of the venture capitalists who invested early in the company, according to people familiar with the matter. Though most of them will still make a tidy profit, expectations for its market value had been much higher than what the current stock price indicates, the people said. In secondary markets, some trades reached $55 per share in recent months, partly because of an expectation that Robinhood would be valued similarly to Coinbase, which has a market capitalization of about $50 billion.

Menlo Park, Calfornia-based Robinhood had sought to go public for months. When it burst onto the public stage in March 2020, amid an emboldened wave of retail trading, it started laying the foundations for an offering. One crucial step was enlisting Dan Gallagher, a former U.S. Securities and Exchange Commissioner, as its chief legal officer.

He swept in to streamline the company’s compliance -- before his arrival, the legal team tended to accept it was overtaxed and had shortcomings, according to a person familiar with the matter. Gallagher told employees he didn’t want compliance problems to stand in the way of Robinhood’s IPO timeline, the person said.

The company charged ahead: Christina Lai came in to lead Robinhood’s corporate legal group and work on its public-readiness push. The firm rapidly added to the team working on the IPO in the first four months since Gallagher’s arrival, the person added. He was paid a package totaling about $30 million, according to filings.

Robinhood’s IPO produced an even bigger windfall for Tenev and Bhatt. At Thursday’s closing price, Tenev’s net worth is $2.2 billion, according to the Bloomberg Billionaires Index. Bhatt, who shared the CEO duties until last year and is now the company’s chief creative officer, is worth $2.5 billion.

The Robinhood of legend robbed from the rich and gave to the poor. The now-public company, for a day at least, left the users who bought its IPO worse off.

“There’s a lot of negative sentiment and a ‘retail grudge’ from GME/AMC meme stock history,” Vivian Tu, 27, an investor and creator of finance content on TikTok, said in an email. “The way HOOD has traded today, especially against the overall market ticking higher, means that there are more Robinhood naysayers than previously thought.”