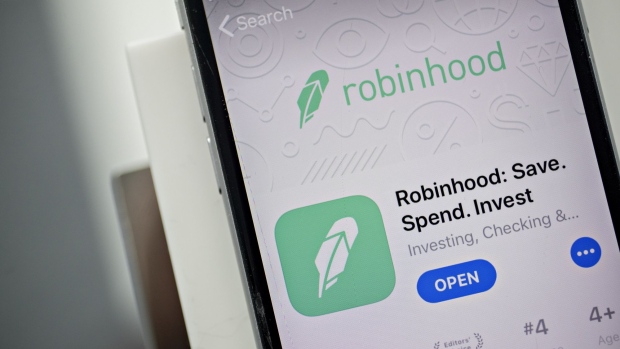 The Robinhood application is displayed in the App Store on an Apple Inc. iPhone in an arranged photograph taken in Washington, D.C., U.S., on Friday, Dec. 14, 2018. The Securities Investor Protection Corp. said a new checking account from Robinhood Financial LLC raises red flags and that the deposited funds may not be eligible for protection. Photographer: Andrew Harrer/Bloomberg , Bloomberg

Global investors aspiring to be part of a Robinhood trading frenzy just like their U.S. counterparts are going to have to wait, indefinitely.

Robinhood Markets Inc., which runs a no-fee trading app in the U.S. that’s drawing millions of new users as well as a few critics, has put its global expansion on hold and postponed its launch in the U.K. That’s in the wake of several technical issues and outages to its platform this year, as well as concerns that it’s indirectly encouraging people with little financial expertise to take uninformed risks.

The decision to postpone its U.K. launch is not related to regulation but reflects efforts to refocus on strengthening its core business in the U.S. before expanding elsewhere, the Menlo Park, California-based company said in an emailed response to questions.

In the first quarter of 2020 alone, Robinhood racked up 2 million new accounts, exceeding the combined number of new users at Charles Schwab Corp., TD Ameritrade Holding Corp. and E*Trade Financial Corp. during the period. As of May, the firm had 13 million accounts, up from 10 million at the end of 2019. Half of its new users so far this year were first-time investors, according to the company.

Growth at a breakneck speed has been accompanied by some hiccups. A system-wide outage in March lasted an entire trading day, preventing customers from making trades as stocks surged after an intense rout. In June, the company changed aspects of its options offering after a young customer’s suicide.

Robinhood had already delayed its previous U.K. launch date from early 2020 and was planning to have its trading app available to users there before the end of the year. Its business model was approved, and it received regulatory approvals to operate as a broker in the country in August 2019, according to the company.

“We’ll be closing our waitlist and taking down our U.K. website shortly,” the firm said in an email viewed by Bloomberg to those on a waiting list on Tuesday. “We’ve come to recognise that our efforts are currently best spent on strengthening our core business in the US and making further investments in our foundational systems.”

The company doesn’t have a timeline for when it may revive plans for its U.K. launch.

Companies in the U.K. that offer similar services were boosted by the news. U.K. retail investment services provider Hargreaves Lansdown Plc’s shares rose as much as 11 per cent in London trading, the biggest intraday advance since March 13. Another investment platform provider, AJ Bell Plc, climbed as much as 2.9 per cent.