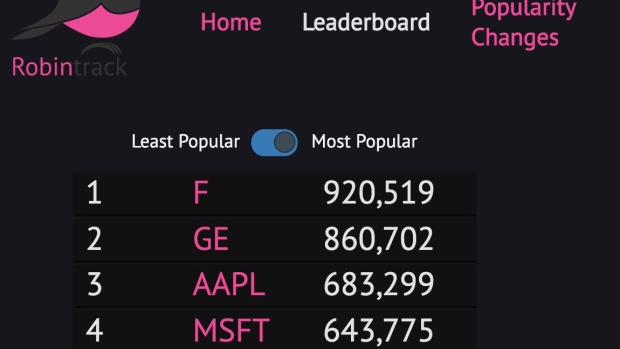 A pedestrian wearing a face mask looks at a smartphone while passing in front of the New York Stock Exchange (NYSE) in New York, U.S., on Monday, July 20, 2020. U.S. stocks fluctuated in light trading as investors are keeping an eye on Washington, where lawmakers will begin hammering out a rescue package to replace some of the expiring benefits earlier versions contained. Photographer: Michael Nagle/Bloomberg , Bloomberg

(Bloomberg) -- Robintrack.net, the website whose hourly updates on retail stock demand became a minor obsession of Wall Street, will end its service after owners of the Robinhood investing app curtailed access to user data.

The two-year-old portal “will be coming to an end, at least in its current form,” according to its creator, Casey Primozic, 23, who built the site as a college side project and watched daily traffic swell to the tens of thousands. Robinhood will stop providing the feed on which Robintrack’s information is based out of concern it’s disadvantaging clients.

“They said the reason they’re doing this is because ‘other people’ are using it in ways they can’t monitor/control and potentially at the expense of their users,” he wrote in a message to Bloomberg News. “They feel it paints Robinhood as being full of day traders when they say most of their users are ‘buy and hold.”’

In an emailed statement from a spokesperson, Menlo Park, California-based Robinhood confirmed it will stop displaying the number of customers who hold a particular stock, and limit the data feed in the near future. “The trend data that is available on our web platform can be reported by third parties in a way that could be misconstrued or misunderstood,” the email said. “Importantly it is not representative of how our customer base uses Robinhood.”

CNBC reported earlier that Robinhood was curtailing access to the data.

Built in three months, Robintrack became a sideshow to the rally in U.S. equities that began in March, holding a mirror to buying and selling by armies of small-time stock dabblers and possibly amplifying their impact. The site did something that had eluded Wall Street’s intelligence-gathering machine previously: figure out what retail investors are doing in real time. It’s also sparked a raging debate over to what degree small investors are driving the gains.

Last month, Primozic said he had been contacted by hedge funds and other financial firms interested in aggregating his website’s data, which shows how many accounts own stocks on the Robinhood platform. Some of the people he spoke to were looking into creating algorithms based on the information.

On Friday, Primozic said he was told in a 15-minute phone call with a product manager that the firm would “be interested in keeping the conversation open” about how the company might provide the data in the future.

“They said it’s OK that I keep Robintrack up containing all data I’ve collected thus far, but no new data will be available once they shut down the API,” he said. “It will not be available to anyone outside of Robinhood, as far as I know.”