Canada’s labor market continued to heal with a stronger-than-expected employment gain in August as businesses ramped up hiring to meet pent-up demand for services after COVID-19 restrictions were lifted.

The economy added 90,200 jobs last month, Statistics Canada reported Friday in Ottawa, topping the 68,200 consensus forecast in a Bloomberg survey. The unemployment rate fell to 7.1 per cent from 7.5 per cent in July.

Friday’s report, which follows a gain of 94,000 in July and 231,000 in June, depicts a labor market that strengthened over the summer as high vaccination rates allowed businesses to reopen and hire back staff. It may also quell fears that generous support programs from Prime Minister Justin Trudeau’s government kept some workers from seeking employment.

“This is still the reopening story,” Veronica Clark, an economist with Citigroup Global Markets Inc., said on BNN Bloomberg Television.

The Canada dollar was little changed after the report, holding gains from earlier in the day that had the currency up 0.5 per cent to $1.2597 per U.S. dollar as of 9:38 a.m. 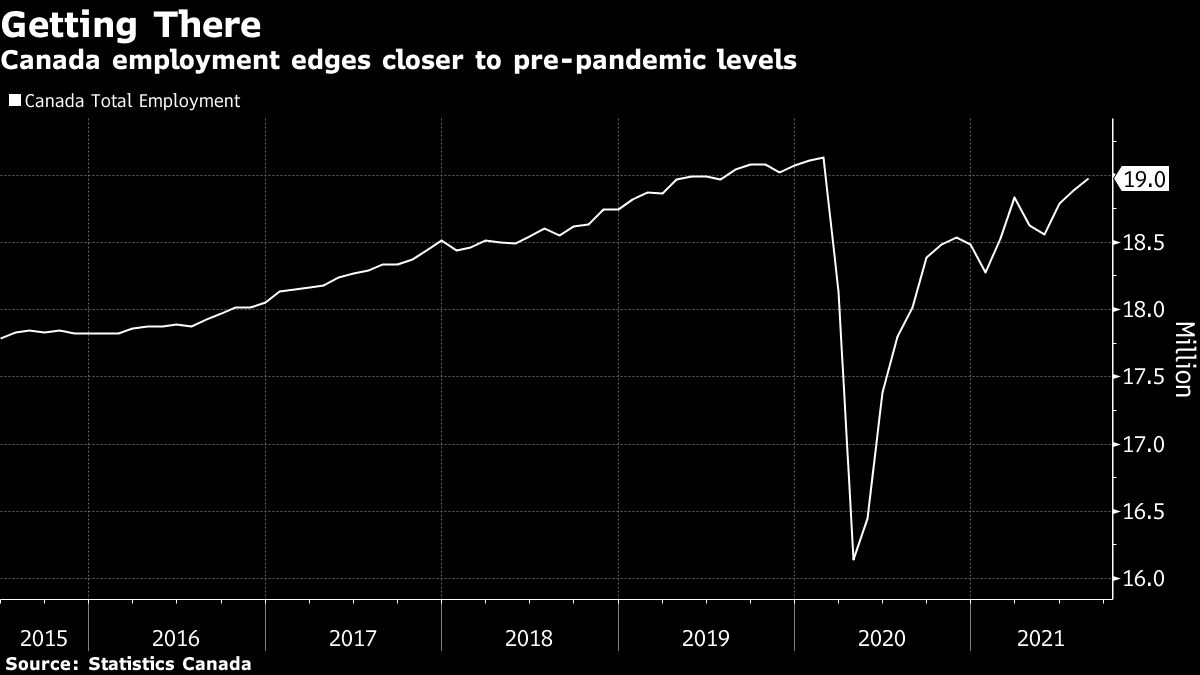 Strong jobs numbers are a bit of good news Trudeau, 10 days before an election. He’s locked in a tight race with Conservative challenger Erin O’Toole, who has criticized the government’s pandemic response programs, saying they need to be “adapted” to changing employment conditions while remaining available in hard-hit sectors.

“The facile answer that many give is we are competing against” the support programs, Rocco Rossi, president and CEO of the Ontario Chamber of Commerce, said by phone. “What’s also at play is after 18 months, being told there is something looking to kill you. There is a lot of hesitation from a safety standpoint.”

The overall gain in August pushed employment in the service sector back to its pre-COVIDlevels. Industries hardest hit by the pandemic, such as accommodation and food services, led gains. Most of the increase was concentrated in full-time employment, which grew by 68,500, while part-time employment was up 21,700.

In a speech Thursday, Bank of Canada Governor Tiff Macklem said the bounce-back in employment over the summer underscores how the “unevenness” in the labor market is moderating after the pandemic hit low-wage workers particularly hard.

Policy makers argue employment will need to surpass pre-pandemic levels before a complete recovery is achieved, because the population has grown since the start of the crisis. The better-than-expected jobs numbers reinforce expectations the bank will reduce its purchases of government bonds in October, a signal the recovery is progressing.

“As for a rate hike, we still favor a move in the first quarter of 2023 as a baseline, with risks tilting toward an earlier move if the job market navigates the fall and winter quarters without a serious stumble.”

“This report should bring some comfort to the BoC that the surprise contraction in July GDP doesn’t reflect the true momentum in the economy,” Benjamin Reitzes, rates and macro strategist at Bank of Montreal, said by email.

The hiring last month brings Canada employment within 156,000 jobs of pre-pandemic levels. Hours worked were little changed, up 0.1 per cent in August from last month.

In the U.S., job growth slowed in August, reflecting fears around the rapidly spreading delta variant and difficulty in finding workers. With Canada also in another COVID wave, economists anticipate rising cases will curb growth in the fall.