Rocket Cos. fell Wednesday, halting a three-day rally driven by sentiment that the home-loan provider was the latest retail-trader favorite for its high short interest.

The stock fell as much as 30 per cent, its steepest decline ever, after RBC Capital Markets downgraded its recommendation to sector perform from outperform, with a price target that suggests a 28 per cent drop from Tuesday’s close. While mortgage demand is expected to continue to boost growth, that is now more than being captured in Rocket’s current valuation, analyst Daniel Perlin said in his report.

Rocket hit an all-time high Tuesday after CNBC mentioned the company as a possible new target among traders discussing stocks on Reddit. The stock has more than doubled since it went public in August and now has a market capitalization of about US$60 billion. 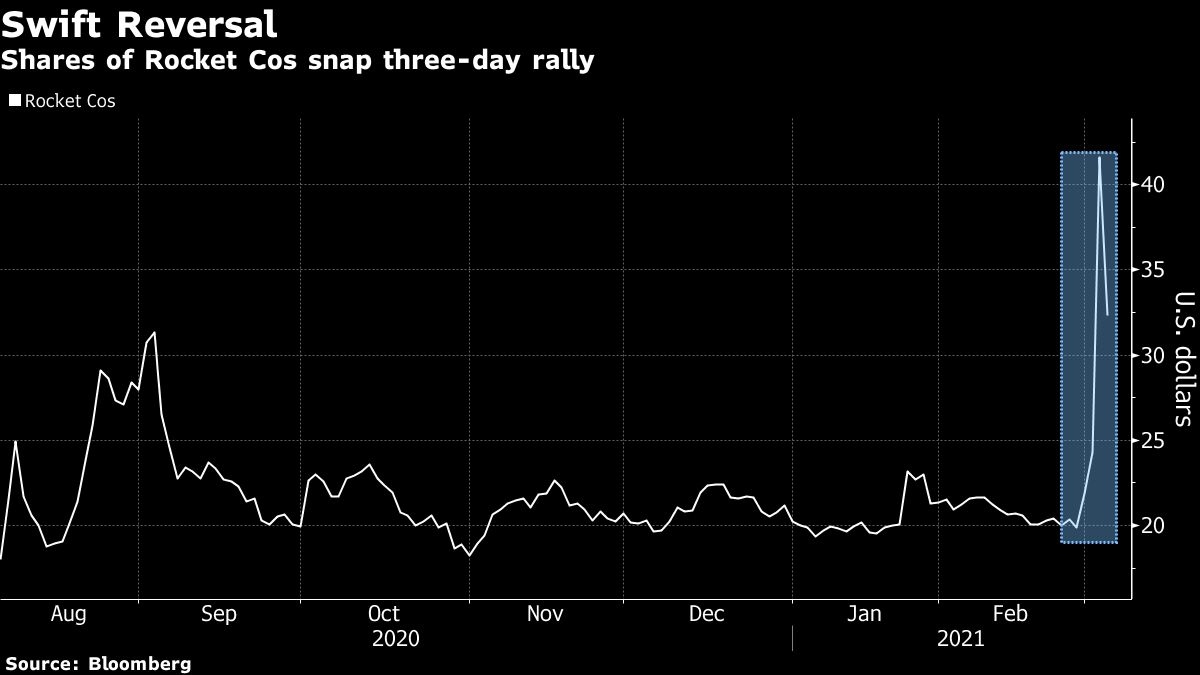 “It seems heavy short interest in the stock was exposed, driving a jump at the open and the dam burst once heavy open interest in US$30 call options were triggered, fueling another dealer gamma squeeze like we have seen with GameStop,” Neil Wilson, chief market analyst for Markets.com, said in emailed comments.

Rocket carries 46 per cent short interest as a percentage of float, according to S3 analytics. The analytics provider published a report Tuesday identifying exceptionally high trading and option volume for the Detroit-based company’s stock, alongside a large amount of short selling into the rally.

Reddit comment volume for Rocket surged to nearly 19 per cent of total comments on the forum WallStreetBets Tuesday, according to SwaggyStocks, a ticker and sentiment tracker. Rocket was the fifth-most-mentioned company on the market social media platform Stocktwits yesterday, at 3 per cent of 271,666 stories carried on Bloomberg.

Rocket’s jump may have been a matter of time, according to Bloomberg Intelligence analyst Ben Elliott. “Rocket has been a fringe meme stock for a while, so I figured something like this would happen eventually,” he said.

The company’s fundamentals, however, don’t support the 16-17x price-to-forward earnings multiple implied by its March 2 close, Elliott said in a note. “Yet surprisingly resilient earnings may support a re-rating of the massive, tech-focused, nonbank lenders like Rocket and UWM if they keep performing amid rising rates.”

Rocket’s gains, however, signal more than just Reddit mania. With a market value that’s worth more than some of its peers combined, the company has cemented itself as a heavyweight in the emerging mortgage tech sector following an August IPO that was bolstered by retail investors and housing market tailwinds.

Its peers have also gained: Mr. Cooper Group Inc. is up 8.8 per cent this year, while newly-listed loanDepot Inc. surged 46 per cent since it went public last month.