A flurry of buying that saw GameStop Corp. shares almost quadruple from Tuesday’s close spread to a host of other meme stocks at the center of last month’s day trader-fueled boom and bust.

GameStop jumped 104 per cent in Wednesday’s cash session, spurred by a final-hour surge that brought its biggest advance since Jan. 29, the day Robinhood Markets restricted trading in it and 49 other stocks at the height of the frenzy. An equally weighted Bloomberg basket of those rose more than 5 per cent, the most since late January. AMC Entertainment Inc. rallied 18 per cent to push a three-day climb toward 59 per cent. Express Inc. surged 41 per cent, Naked Brand Group gained 31 per cent and Koss Corp. jumped 55 per cent.

The flurry of activity inflated trading volumes in the meme stocks and caused an outage on Reddit’s WallStreetBets forum, the hub of the January volatility. The tumult continued in late trading, where GameStop rallied another 120 per cent before paring the advance. At US$135, the stock is up more than 200 per cent from its close on Tuesday.

“It seems like the Reddit crowd is still active and when you see a bit of news like that they’re pressing again,” Keith Gangl, portfolio manager at Gradient Investments, said in a phone interview. “Though I’m not sure how that’ll last,” he added 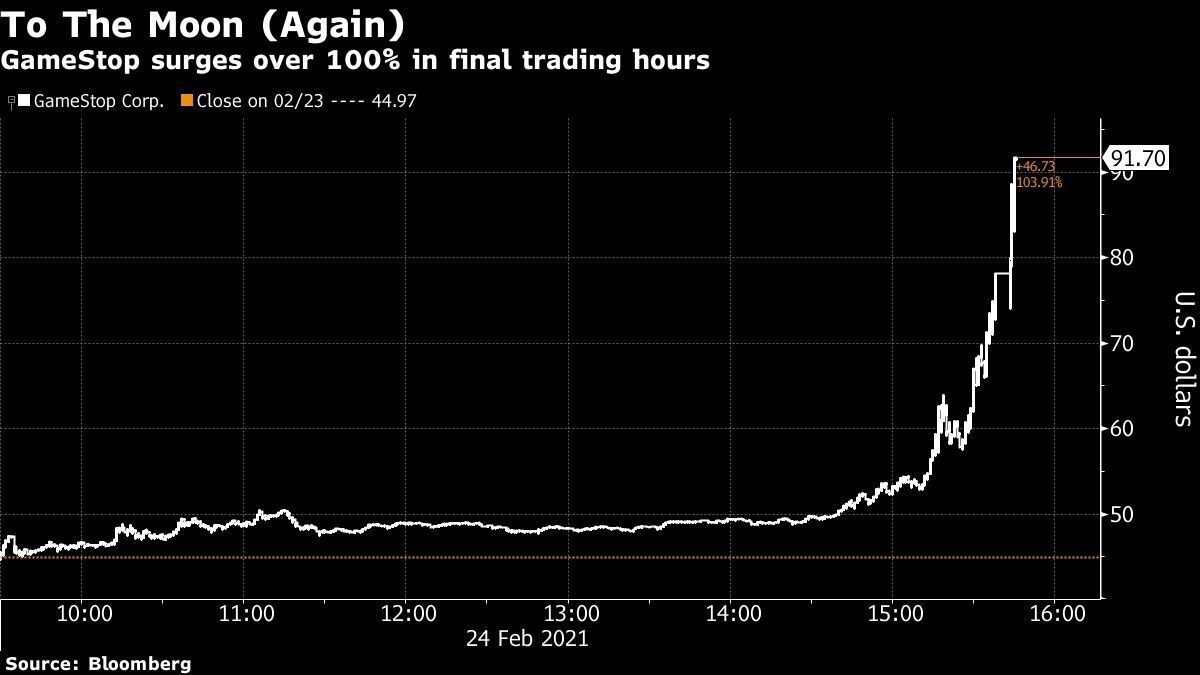 The sudden revival in left-for-dead stocks recalled the frenzy last month that captured the attention of Wall Street, regulators and eventually Congress, as members of Reddit’s WallStreetBets forum egged on retail hordes in an attempt to take on professional short sellers.

Various explanations circulated as to what spurred the rallies. The GameStop frenzy came after Bloomberg News reported late Tuesday that the company’s chief financial officer Jim Bell was pushed out in a disagreement over strategy to make way for an executive more in line with the vision of activist investor and board member Ryan Cohen, the co-founder of online pet-food retailer Chewy.com. His addition to the board in early January underpinned the first flurry of moves in the stock after capturing the attention of WallStreetBets.

The clearinghouse whose demands for increased margin collateral from Robinhood forced the brokerage to restrict trading last month published a white paper Wednesday that laid the grounds for speeding up the stock settlement process. It proposed cutting settlement to one day from two, prompting some chest puffing among the retail crowd on Reddit.

The now infamous WallStreetBets forum, which boasts 9.2 million members, saw so much demand that the site would not load. When attempted, a page read “www.reddit.com is currently unable to handle this request” as of 4:43 p.m. in New York.

--With assistance from Kamaron Leach.