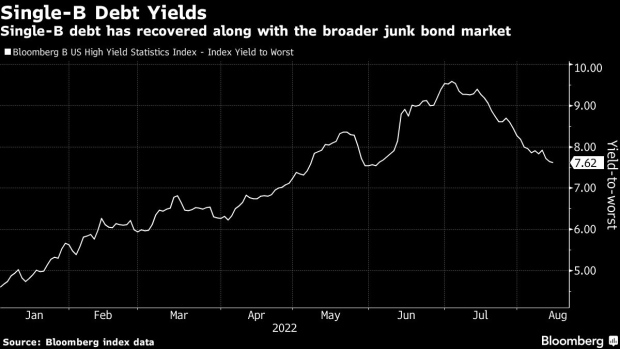 The Royal Caribbean Cruises Freedom of the Seas ship departs for a simulated voyage from PortMiami in Miami, Florida, U.S., on Sunday, June 20, 2021. Freedom of the Seas can carry around 4,500 guests, and it's expected to take about 650 on this first two-night loop, all of them Royal Caribbean employees who volunteered and were allowed to bring an 18-and-over guest. , Bloomberg

The arrival of Covid-19 in 2020 shut down the cruise business, and Royal Caribbean loaded up on debt after the Federal Reserve slashed interest rates to help companies survive. Now the Fed is raising rates to stem inflation, and the cost of borrowing has increased broadly amid fears of a recession and geopolitical risks from the Russia-Ukraine war.

Some of Royal Caribbean’s existing bonds traded down following the announcement of the debt sale Monday. The company’s 5.5% notes maturing in 2028 fell more than a point to 81 cents on the dollar, according to Trace bond pricing data.

Pricing guidance decreased during the marketing process, down from an initial range of a low 12% yield, said a person familiar with the matter, who asked not to be identified because they’re not authorized to speak about it. While that’s typically a sign of investor demand, the final 11.625% coupon still marks a steep increase in the cost of borrowing.

The offering was also increased from $1 billion.

Royal Caribbean sold its last junk bond in January, a refinancing that saw costs decrease during the marketing process and wrapped up with a 5.375% coupon. Both the new deal and the January sale are unsecured and rated in the single-B band of credit ratings, the middle tier of junk.

On average, yields on single-B rated junk bonds have increased to 7.6% from about 4.6% at the start of the year, according to Bloomberg index data. But they’ve fallen after a steady rally in the high-yield bond market since the end of June and an influx of cash into the asset class that’s created a window for companies to refinance.

Royal Caribbean tapped corporate debt markets throughout the pandemic and now has more than $23 billion in debt on its balance sheet as of June 30, 2022, according to its latest quarterly earnings filing.

Royal Caribbean’s new five-year unsecured notes, led by Bank of America Corp., will be used to repay principal payments on debt maturing in 2022 and 2023, as well as potentially borrowings under revolving credit facilities and other debt, according to the company’s news release.