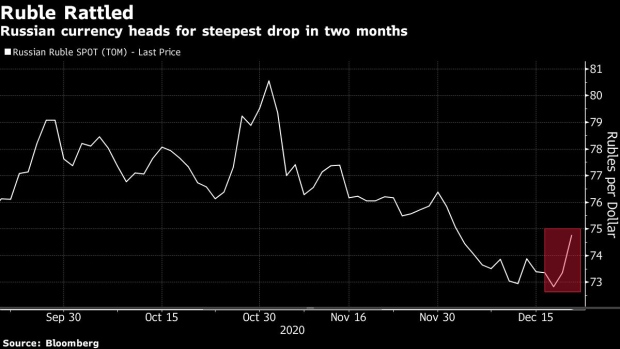 Oil pumping jacks, also known as "nodding donkeys", in an oilfield near Neftekamsk, in the Republic of Bashkortostan, Russia, on Thursday, Nov. 19, 2020. The flaring coronavirus outbreak will be a key issue for OPEC+ when it meets at the end of the month to decide on whether to delay a planned easing of cuts early next year. , Bloomberg

(Bloomberg) -- Russia’s ruble fell the most since March as oil tumbled on concern the pandemic is worsening and a report suggested the U.S. may impose sanctions on the country in response to cyber attacks.

The currency of the world’s biggest energy exporter led its emerging-market peers lower as Brent crude slumped after a faster-spreading mutation of the Covid-19 virus was detected in the U.K. Russian bond yields climbed to the highest level since early November after Reuters said U.S. President-Elect Joe Biden was weighing sanctions and other measures in response to an alleged Russian hacking campaign.

“The Russian ruble is the main victim of rapidly escalating risk aversion,” said Piotr Matys, a strategist at Rabobank in London. “In addition to rising tensions between the U.S. and Russia over allegations of a cyber attack, the markets are also concerned about the latest developments in the U.K.”

The ruble had rallied since the U.S. election in early November as concern about possible penalties from the incoming Biden administration eased. However, the market mood shifted last week as the hacking reports brought the prospect of tougher sanctions back to the fore.