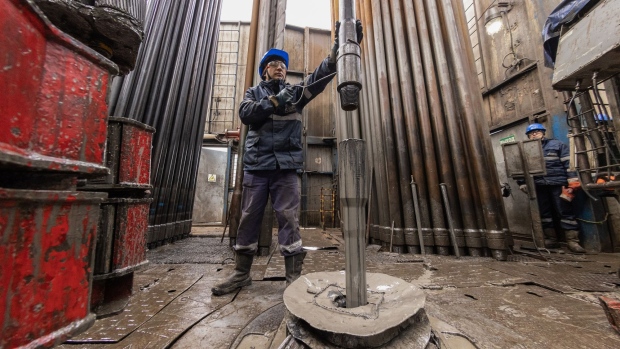 A worker guides drilling pipes at a gas drilling rig on the Gazprom PJSC Chayandinskoye oil, gas and condensate field, a resource base for the Power of Siberia gas pipeline, in the Lensk district of the Sakha Republic, Russia, on Wednesday, Oct. 13, 2021. European natural gas futures declined after Russia signaled that it may offer additional volumes soon. Photographer: Andrey Rudakov/Bloomberg , Bloomberg

(Bloomberg) -- Russia ramped up its oil output in January yet likely pumped below its OPEC+ quota for a second consecutive month, as the nation’s producers struggle with a lack of spare capacity.

The Organization of Petroleum Exporting Countries and its allies, including Russia, will meet Wednesday to decide on production policy for March. Delegates from about half the coalition’s members say they expect the group to ratify another 400,000 barrel-a-day supply hike.

However, OPEC+ members may not be able to pump the full amount of crude their individual quotas will allow because of a lack of spare capacity. This is being exacerbated by a tightening oil market as consumption rises, with analysts now seeing the potential for prices to hit $100 a barrel this year, raising inflationary pressure.

Russian oil producers pumped 46.53 million tons of crude and condensate in January, according to preliminary data from the Energy Ministry’s CDU-TEK unit. That equates to 11 million barrels a day, based on a 7.33 barrel-per-ton conversion rate, and is 0.7% higher than in December.

It’s difficult to fully assess Russia’s compliance with the OPEC+ deal as the CDU-TEK data doesn’t provide a breakdown between crude and condensate, a lighter type of oil that’s excluded from the agreement. If the nation’s condensate output last month was close to December’s level of 950,000 barrels a day, crude-only daily production was around 10.05 million barrels, some 50,000 below its quota for the month.

This would make January the second consecutive month when Russia’s crude-only output was below its monthly OPEC+ quota. In December, the country raised its total output by nearly 0.2%, according to updated CDU-TEK statistics. However, crude-only production missed the quota by around 40,000 barrels a day, according to Bloomberg calculations.

Russia is allowed to add 100,000 barrels a day each month, a quarter of total OPEC+ increases, and expects to bring its oil production back to pre-pandemic levels by April or May, according to Deputy Prime Minister Alexander Novak. Output could continue to rise at the same pace after that, meaning the nation has the potential to reach its updated baseline level of 11.5 million barrels a day, Novak said last summer.

Recent Russian oil-industry data signal the nation’s producers have nearly run out of spare capacity, which is set to slow the pace of increases in the next few months. In the first half of 2022, Russia may only be able to deliver about half of its scheduled increases in crude production, according to analysts surveyed by Bloomberg. Any future output growth will depend on additional drilling, capital spending and fiscal incentives.