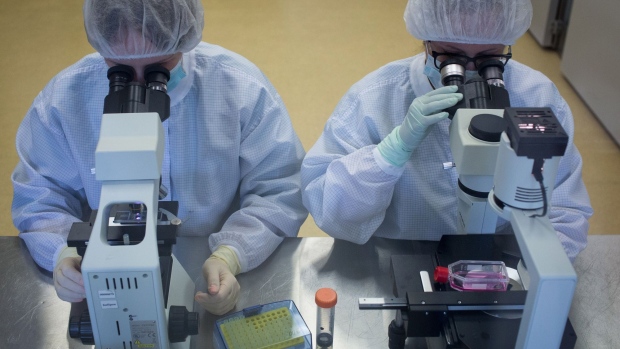 Lab technicians use microscope during production of the 'Gam-COVID-Vac' COVID-19 vaccine, developed by the Gamaleya National Research Center for Epidemiology and Microbiology and the Russian Direct Investment Fund (RDIF), at JSC Binnopharm pharmaceutical complex, operated by Sistema PJSFC, in Zelenograd, Russia, on Friday, Aug. 7, 2020. Russia registered its first coronavirus vaccine, developed by the Gamaleya Institute and the Russian Direct Investment Fund, President Vladimir Putin said during a televised meeting with the government. , Bloomberg

Russia’s proposed COVID-19 vaccine induced an antibody response in all participants in early trials and found no serious adverse effects, according to the first peer-reviewed data on studies of the controversial project.

The vaccine also produced a response in T-cells -- a type of white blood cell that helps the immune system destroy infection -- according to preliminary results from phase 1 and 2 trials that were published Friday in the Lancet medical journal. Russian officials had previously made broadly similar claims about the shot, prior to review by outside experts.

Russia has been seeking to gain international credibility after health officials elsewhere harshly criticized the country’s regulatory approval of the vaccine last month, before it had gone through wider phase 3 trials. Russian President Vladimir Putin hailed Sputnik V, named after the Soviet Union’s 1957 launch of the world’s first satellite into space, as the first vaccine globally to receive clearance.

The trials, which took place in two Russian hospitals and involved 76 healthy adults aged 18 to 60, used a two-part vaccine with two different human adenoviruses -- pathogens linked to the common cold -- to transport the antigen into the body. All participants were given the vaccine, with no control group -- one of several limitations to the trials that were cited in the report.

The investigators took convalescent plasma from 4,817 people who had recovered from mild or moderate COVID-19 to compare post-vaccination immunity with natural immunity. Antibody responses were higher in those vaccinated, according to the data.

The government has announced plans to begin administering the shot more widely to medical personnel and teachers in the coming weeks, ahead of a broader national campaign slated for late this year. The move has led to concerns that political pressure could prevail over safety considerations and risk public health as the world seeks an end to the pandemic.

The Russian investigators tested two forms of the vaccine - frozen and freeze-dried. Phase 1 participants were given one of the two-part shot, while phase 2 groups also received a second shot 21 days after the first. All 40 participants in the phase 2 trial produced antibodies, with higher levels found in those that had received the frozen vaccine. Neutralizing antibody responses were found in all phase 2 patients, while only 61 per cent of phase 1 participants produced them from the single shot.

All phase 2 participants showed T-cell responses within 28 days of vaccination, with the frozen shots again proving more effective than the freeze-dried.

The investigators said limitations to the study include its size, the short follow-up time of 42 days and the fact that some parts of the phase 1 trial used only male volunteers. Despite the age range for the study, the trial also largely focused on younger people in their 20s and 30s.

Russia has also been giving the vaccine to officials and other prominent people outside the trial groups for months without waiting for the full study results. On Friday, Moscow Mayor Sergei Sobyanin, 62, told Putin in a televised video conference that he’d had the shot and felt only minor discomfort at the time. Putin said last month that one of his daughters also had the inoculation and was feeling fine. The Kremlin hasn’t disclosed whether Putin has been vaccinated.

A phase 3 trial was approved on Aug. 26 for 40,000 volunteers from different age and risk groups.

“The immunogenicity bodes well, although nothing can be inferred on immunogenicity in older age groups, and clinical efficacy for any COVID-19 vaccine has not yet been shown,” said Naor Bar-Zeev, an associate professor at the Johns Hopkins Bloomberg School of Public Health, in a linked commentary in The Lancet. “Showing safety will be crucial with COVID-19 vaccines, not only for vaccine acceptance but also for trust in vaccination broadly.”