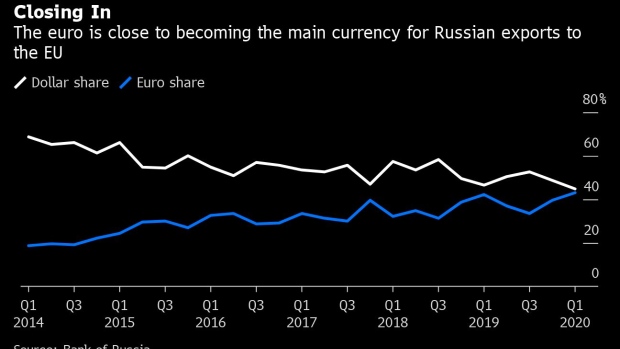 A collection of U.S. one dollar bills sit in this arranged photograph in London, U.K., Photographer: Chris Ratcliffe/Bloomberg , Bloomberg

(Bloomberg) -- Russia now receives more euros than dollars for its exports to China, in the latest sign President Vladimir Putin is plowing ahead with his pledge to reduce dependence on the U.S. currency.

Just over 50% of the goods China bought from its northern neighbor in the first quarter were priced in euros, according to Bank of Russia data published this month. The share of the currency in payment for exports to the European Union increased to 43% from 38% at the end of last year, the data show.

The shift is part of a strategy to “de-dollarize” the Russian economy and lower its vulnerability to the ongoing threat of U.S. sanctions. It was likely accelerated by a move by Russian oil giant Rosneft PJSC to transfer all export contracts into euros last year. Fuel is a major component of exports to China, along with timber.

“It seems that these changes correspond exactly with Rosneft’s transition to settlement in euros,” said Dmitry Marinchenko, an analyst at Fitch Ratings Inc. in Moscow. “It’s more convenient to settle accounts in dollars though, so you shouldn’t expect complete de-dollarization.”

The data show that Russia still relies heavily on the dollar to pay for imports from the EU and China. But the ruble’s share in exports rose to 15% in 2019, in large part due to a jump in exports to India in the currency, the central bank data show.

Russia’s moves have barely diminished the greenback’s dominant role in the global financial system. The share of currency trades in dollars increased to 88.3% in 2019 from 87.6% in 2016, according to the Bank for International Settlements. The proportion of foreign reserves held in dollars has remained steady around 60% over the past decade.

(Updates with data on ruble’s share in trade in fifth paragraph.)