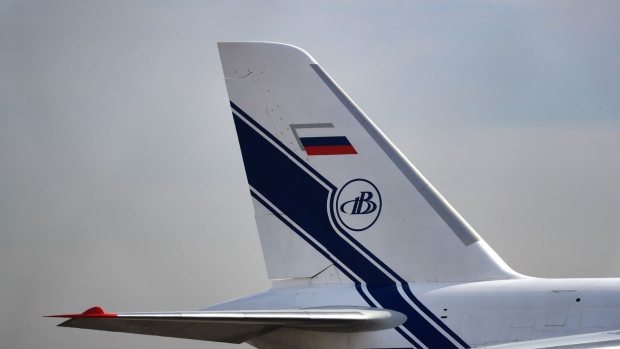 Livery for Volga-Dnepr Group and the Russian flag on the tail fin of an Antonov An-124 strategic airlift cargo aircraft at Leipzig/Halle Airport in Schkeuditz, Germany, on Wednesday, March 2, 2022. Russia's invasion of Ukraine has sidelined a fleet of massive air freighters that oil companies and engineering firms rely on to carry oversize items such as helicopters, power turbines and are even used for spacecraft. , Bloomberg

(Bloomberg) -- Russia has lost its seat on the governing council of a UN agency that supports the cooperation and coordination of civil air travel among 193 countries.

Russia failed to get enough support to keep its seat on the 36-member governing council of the International Civil Aviation Organization, or ICAO, according to results posted Saturday on Twitter. A spokesman for ICAO did not directly comment on the results. Voting takes place every three years.

Russia had been a member of ICAO’s premier tier of the council, or nations of “chief importance in air transport.” The US, Canada, China, Germany and Brazil were among countries selected to the phase 1 tier during Saturday’s vote at ICAO’s assembly in Montreal.

Phase 2 of the vote, which comprises of members that make the largest contributions to the provision of facilities for air travel, also took place on Saturday, while a third phase of voting to select states to ensure geographical representation will be held Tuesday.

Russia’s invasion of Ukraine was a major focus of the United Nations General Assembly last month, drawing condemnation from Western governments. The ICAO vote also comes a day after a UN Security Council resolution condemning Moscow’s annexation of Ukrainian territory failed when Russia exercised its veto as a permanent member of the council.

In February, just after Russia invaded Ukraine, ICAO condemned Moscow for “the violation of the territorial integrity and sovereignty” of Ukraine’s airspace, a news release said.

The agency was created in 1944 to “promote the safe and orderly development of civil aviation around the world,” according to its website.