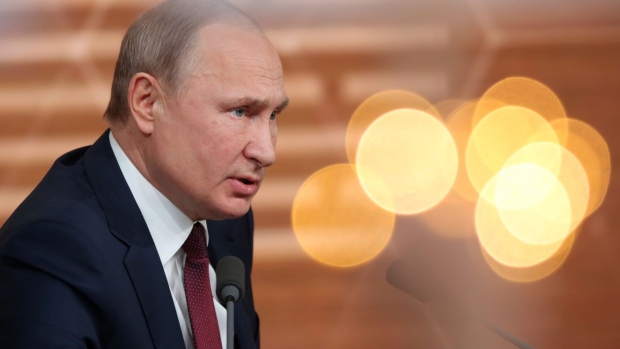 (Bloomberg) -- Russia may cut its oil production in response to the G-7 cap on the price of its crude, President Vladimir Putin said.

A decision on Moscow’s response will be announced in a presidential decree within the next several days, Putin told reporters in comments broadcast on state Rossiya 24 TV, providing no further details.

“I’m not saying now that this is a decision, but if necessary we’ll think about possible production cuts,” Putin said. “I have already said that we simply won’t sell oil to those countries” that participate in a price cap.

After months of planning and negotiations, the biggest tranche of international sanctions on Russian oil took effect on Monday. The European Union banned almost all seaborne imports of the country’s crude oil, and the G-7 agreed that anyone wanting to access key services that the bloc provides — especially insurance — will have to pay less than $60 a barrel.

There are still enormous unanswered questions that will shape the impact of the measures on the oil market, including the depth of non-European insurance markets, the appetite of some tanker owners to participate in trade with Russia, and exactly how effective enforcement of the cap can be.

“Whatever Russia does there are no good options,” Ben Harris, assistant secretary for economic policy at the US Treasury, said earlier this week. “Any supply disruption not hurts their partners, but also really hurts their pocketbooks.”

Russia has said the effects of the price cap on oil production will be limited. Any volatility in the nation’s output “won’t be higher than the fluctuations in spring,” First Deputy Energy Minister Pavel Sorokin said earlier this week.

In April, two months into the invasion of Ukraine, Russia pumped an average of around 10.05 million barrels a day, down from 11.08 million a day in February, according to industry data seen by Bloomberg. Output then started to recover, reaching an eight-month high in November.

The price cap won’t have any negative consequences on Russia’s revenue as the $60 a barrel threshold introduced by western countries “corresponds to the prices at which we sell today,” Putin said. “We already sell at about these prices, so don’t worry about the budget.”

Russia’s flagship Urals crude that’s exported from the Baltic port of Primorsk was assessed at $41.59 a barrel on Thursday, according to data from Argus Media, whose figures the Russian government has used to calculate export duties.

However, the price of Russia’s ESPO crude blend in Asia is holding well above the western cap, trading at $67.11 a barrel on Thursday, Argus data show.

(Updates from sixth paragraph with US comment, additional data.)