The E.U. won't have enough gas to get through the winter without rationing: Strategist

Russia began sending natural gas to Europe through the Nord Stream pipeline system after a pause, bringing relief to a continent whose economy is starting to wobble under the strain of reduced supplies.

Shipments returned to 40 per cent of capacity, their level before flows were halted for 10 days of planned maintenance, data from the pipeline operator showed.

While the restart eases Europe’s worst fears -- that Russian President Vladimir Putin would keep the pipeline halted -- much uncertainty remains about future flows through the link.

The European Union is racing to stockpile natural gas ahead of the winter amid its worst energy crisis in decades. For now, the pipeline’s restart may alleviate concerns about a longer stoppage that could lead to massive economic damage. The situation has already undermined the euro, which has tumbled to near-parity with the US dollar.

“The resumption this morning of flows along Nord Stream is likely to lead to a collective sign of relief from not just the European gas market, but from the wider economy,” said Tom Marzec-Manser, head of gas analytics at ICIS in London.

Moscow has been curbing gas shipments to Europe for months, but the continent still relies on the little it’s getting to fill the retired salt caverns, aquifers and fuel depots that hold its fuel inventories. Without Russian gas, Europe is unlikely to have enough supply to warm homes and keep the lights on throughout the winter.

In Germany, the EU’s largest economy, gas-storage facilities are at about 65 per cent capacity, well short of the government’s 90 per cent target. Based on fill rates in the week before Nord Stream shut for maintenance, it would take more than two months to reach the level that would heat homes and keep factories running through the colder months.

Even though gas is flowing again through Nord Stream, “energy dependency is being used as a weapon” by Russia, German Foreign Minister Annalena Baerbock told reporters.

Moscow rebuffed the characterization. “This is not about any pressure, any blackmail,” Kremlin spokesperson Dmitry Peskov told reporters on a conference call. “That’s an absolutely incorrect statement. We categorically reject that.” Any technical issues related to the pipeline are the result of western sanctions on Russia, he said.

European gas prices traded 5.7 per cent lower at 146.25 euros a megawatt-hour by 1 p.m. in Amsterdam. The benchmark contract earlier dropped as much as 6.5 per cent.

On Thursday, German energy giant Uniper SE said it was receiving shipments via Nord Stream at 40 per cent of nominated volumes, which is in line with the pipeline’s flow level. While the additional supplies are “helpful,” the European gas market remains tight, according to a company spokesman.

Italy’s Eni SpA said it also expects a boost in deliveries from Russia. Gazprom shipments to Austria’s OMV AG have increased following the link’s restart, according to local report.

Policy makers had prepared for the worst, with the European Union on Wednesday unveiling a plan to try to curb gas consumption by 15 per cent. Budget Commissioner Johannes Hahn even said he didn’t expect the pipeline to come back. 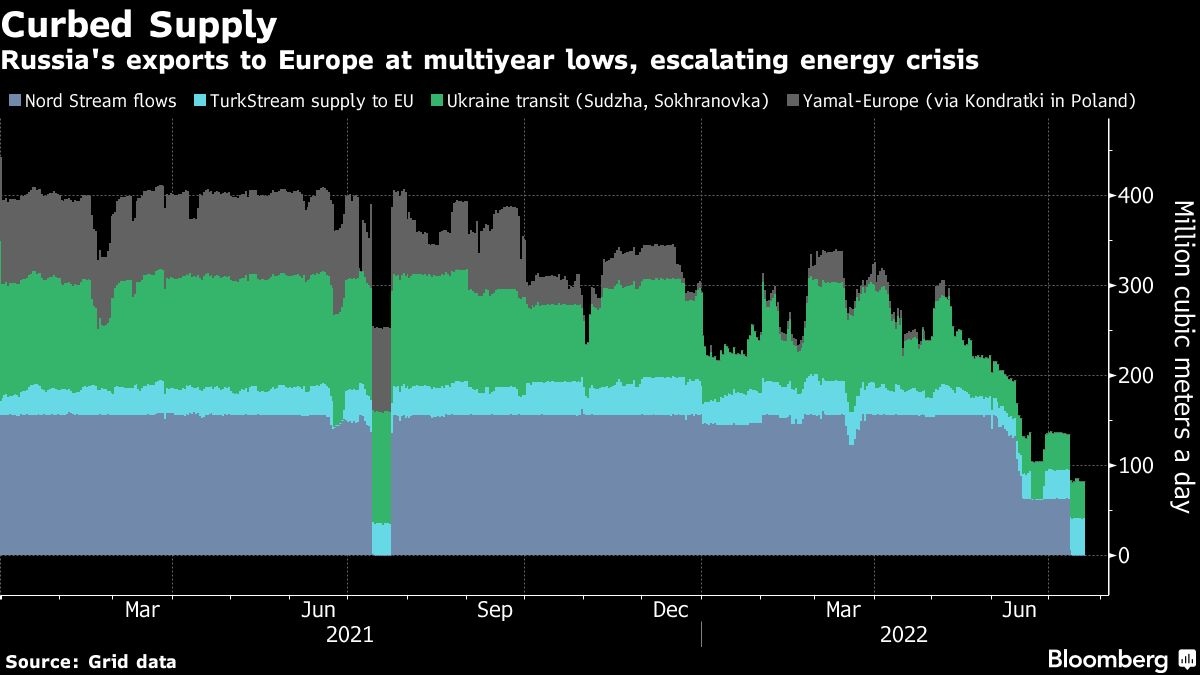 Putin has indicated that flows could fall to 20 per cent as soon as next week. Only two turbines at a compressor station in Russia, which feeds the pipeline, are currently working, he said, and one of them needs to go for maintenance this month. Flows could drop unless a replacement component sent from Canada arrives in Russia soon, following sanctions-related delays, according to Putin.

“Sending flows, but at capped levels, runs in Russia’s favor,” Tim Partridge, head of energy trading at DB Group Europe, said in a report on Wednesday. “It allows the Kremlin to continue to use the pipeline as a way of increasing volatility, while still reaping immense profits on inflated energy prices.”

European gas prices have surged over the past year, climbing to a record shortly after Russia invaded Ukraine. While prices have eased since then, they are still several times higher than the average of the past five years, boosting costs for consumers already contending with higher prices of everything from food to fuel.

Concerns about gas shortages have already spread to every market, weakening the euro. A complete shutdown of Russian supplies will put Germany at the risk of losing almost 5 per cent of its economic output, the International Monetary Fund warned.