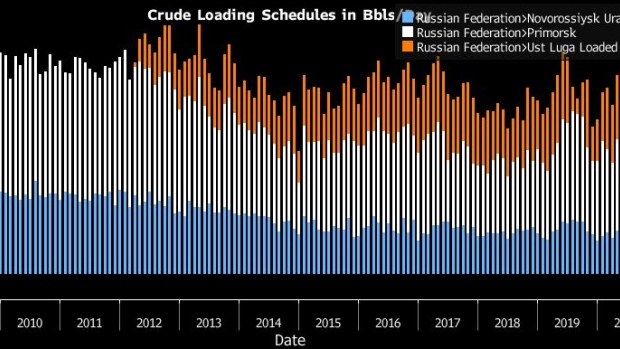 (Bloomberg) -- Russia’s flagship crude is rising in price in Europe in the wake of Saudi Arabia’s surprise oil production cuts.

The nation’s Urals crude sold at a slight discount of 70 cents a barrel to benchmark Dated Brent in northwest Europe on Jan. 15, a increase of almost $1 from an 8-month low seen before Christmas, according to traders monitoring a pricing platform run by S&P Global Platts.

Saudi Arabia, the world’s top oil exporter, surprised global oil markets earlier this month by announcing a plan to go it alone with output cuts of 1 million barrels a day in February and March. Most European buyers have seen their contractual volumes for February cut, and one refiner didn’t get any allocated cargoes. By contrast, Russia will boost its output slightly while most other nations participating in a supply-management pact kept production stable.

Urals, which has similar properties to Saudi Arabia’s benchmark Arab Light crude, has seen an increase in demand from European refiners in the wake of the Riyadh’s decision to scale back supplies. Only two or three out of 48 cargoes for loading from Baltic ports in January have yet to find buyers, according to Urals traders, who say that the market has become busier since the Saudi cuts.

The amount of Urals for loading the first five days of February from Baltic ports will rise slightly to six cargoes, according to a partial loading program seen by Bloomberg. The full-month February program will be available at the end of the January.