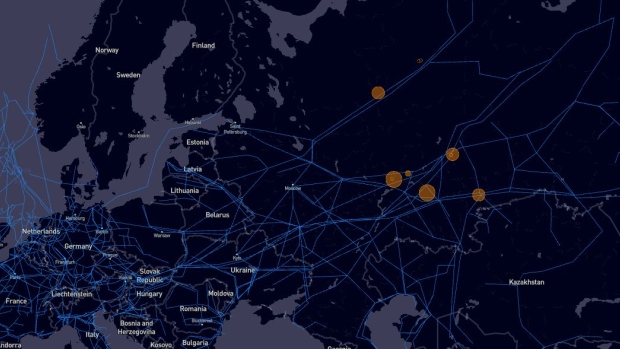 (Bloomberg) -- A massive methane plume detected earlier this month over Russia stemmed from emergency repairs that forced the partial shutdown of a Gazprom PJSC pipeline, the company said, taking responsibility for one of the energy sector’s most intense recent leaks of the superpotent greenhouse gas.

Gazprom's enormous methane leak, first identified in satellite data by geoanalytics firm Kayrros SAS, points to what’s a worldwide problem preventing the release of a greenhouse gas with 80 times the impact of carbon dioxide in the short term. The Russian gas giant said its pipeline repairs on June 4 released 2.7 million cubic meters (1,830 metric tons) of methane. That has roughly the same short term planet-warming impact of 40,000 internal-combustion cars in the U.S. driving for a year, according to the Environmental Defense Fund.

Kayrros estimated an emissions rate of 395 metric tons an hour, which would make Gazprom responsible for the most severe release it has attributed to the oil and gas sector since September 2019.

Gazprom said the gas was released after it detected a problem with its Urengoy-Center 1 pipeline in Russia's Tatarstan region. The company said that “given the urgency” it wasn’t able to use a mobile compressor station to reduce the methane released by the repairs, though it claimed to still have cut 22% of potential emissions.

Russia’s largest gas company is under pressure to do more to lower the methane emissions caused by its operations as countries in Europe — its biggest market — more closely scrutinize the climate impact of the fuel used to heat their homes and power their grids. The large amounts of methane caused by Russian gas come as the European Union seeks to meet a target of net-zero emissions by mid-century.The leak this month from Gazprom’s pipeline in Tatarstan isn't the only major methane release traced to the Russian company. Kayrros detected another giant methane plume on May 24 with an estimated emissions rate of 214 metric tons an hour. Gazprom said this leak resulted from two days of planned maintenance on the Urengoy-Petrovsk pipeline in Russia's Bashkortostan region. The emissions amounted to about 900,000 cubic meters, it said, which the company described as “in line with the industrial safety regulations.”

Until the June 4 release, that earlier May 24 leak had ranked as the most severe this year detected by Kayrros in public satellite data and that it attributed to the oil and gas sector.

Gazprom also confirmed it was responsible for three more methane releases that have been spotted in Russia this month. The company said that in all cases it sought to use some of the gas, emissions didn’t exceed government-regulated standards and the events would be included in its environmental reports.

Multiple studies have found methane emissions from the oil and gas industry are often higher than what operators and governments report. Releases of the odorless, colorless gas from the U.S. oil and gas supply chain in 2015 were about 60% higher than U.S. Environmental Protection Agency inventory estimate, a 2018 study published in Science found.

Kayrros is one of several companies that monitor satellite data for methane clouds. The ESA data it uses are obtained by the agency’s Sentinel-5 Precursor satellite, which orbits the globe about 14 times a day to produce a rough snapshot of the world’s methane hot spots. Since wind and other atmospheric conditions can affect plumes, Kayrros uses atmospheric dispersion modeling to estimate the emissions rate and each plume’s source location.

Scientists are just beginning to pinpoint the biggest sources of methane and existing data isn’t yet globally comprehensive. Public and private satellite data have helped spot methane plumes in countries including Canada, Bangladesh and Turkmenistan. Still, observations from space can be seasonal due to cloud cover, precipitation and varying light intensity. Satellites can also have difficulty tracking offshore emissions and releases in higher latitudes.

Russian President Vladimir Putin cited methane’s contribution to global warming in an April speech and said it’s “extremely important to develop broad and effective international cooperation in the calculation and monitoring of all polluting emissions into the atmosphere.” Asked about the May 24 incident, the regional ministry of environmental management and ecology said it didn't register any man-made damage in the area during that period.