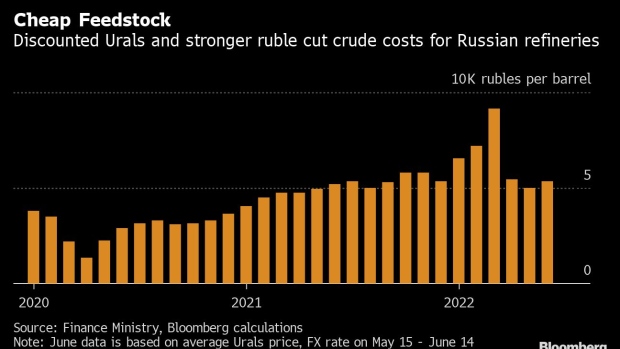 Oil storage tanks stand at the RN-Tuapsinsky refinery, operated by Rosneft Oil Co., as a tanker sails beyond in Tuapse, Russia, on Monday, March 23, 2020. Major oil currencies have fallen much more this month following the plunge in Brent crude prices to less than $30 a barrel, with Russia’s ruble down by 15%. , Bloomberg

(Bloomberg) -- Russia’s oil output is edging back toward pre-war levels, and a revival in large and small refineries scattered across the country is a major driver of the change.

The trend is another example -- from rising oil-product exports to higher prices for Urals crude -- of how Russia’s energy industry is adapting to trade restrictions imposed after its invasion of Ukraine. The country’s refiners were hit hard by the first wave of sanctions, with a knock-on effect on crude production, but they are enjoying “highly favorable” economics right now, said Mikhail Turukalov, Chief Executive Officer of Moscow-based Commodities Markets Analytics.

“Crude costs have nosedived thanks to a more expensive ruble and a wide discount of Urals to Brent,” Turukalov said. State subsidies for domestic fuel suppliers mean the government “is now doubling revenues from every ton of gasoline sold within Russia.”

This isn’t just a domestic concern for Russia. Oil watchers around the world are closely following oil-production trends in the country, which is a top-three crude producer. The initial disruption to its energy industry after the invasion of Ukraine contributed to a 50% jump in crude prices this year, pushing inflation higher and threatening recession.

The country’s ability to pump and sell oil may also determine whether it can keep prosecuting its bloody war in Ukraine, despite the efforts of Western powers to economically isolate Moscow.

Russia’s crude processing in the first 15 days of June jumped to 5.2 million barrels per day, the highest since March, according to data from the Energy Ministry’s CDU-TEK unit that was seen by Bloomberg. The nation’s average daily production from June 1 to 13 climbed 5.1% compared with average daily output for the whole of May, the data show. Oil exports to key foreign markets, which in spring offset some of the decline in demand from domestic refiners, have been roughly flat over the past several weeks, according to the data.

The growth in Russian refining may continue for the next two months, said Viktor Katona, head of sour-crude analysis at data and analytics firm Kpler. “Looking into July, we expect demand to hit 5.3 million barrels per day, implying even further run rate hikes over the upcoming weeks, only to reach the 2022 peak rate of 5.48 million barrels per day in August,” Katona said.

The recovery in Russian oil production will continue in the summer months, Deputy Prime Minister Alexander Novak said in an interview with Rossiya 24 TV.

Higher fuel demand from Russian consumers has been spurred by the start of the summer driving season, particularly in the south of the country where flights are currently banned, according to Moscow-based consultant Petromarket.

The soaring cost of gasoline in Western economies has also supported the earnings of Russian refiners. The state partly compensates them for the difference between domestic prices and the amount they would earn selling the same fuel in Europe. The current value of that subsidy is about $350 a ton, doubling sales revenue and providing “another stream of windfall profits,” said Katona.

Domestic demand isn’t the only factor. Smaller or less modernized refineries that focus on exports of heavy oil products halted or reduced their runs in March and early April as they had difficulty exporting their fuel due to a US import ban. Since then, they have found new customers, mainly in Asia and the Middle East, hungry for feedstock for their power plants.

Russia’s average exports of key oil products in June rose 4.5% from the prior month to 2.4 million barrels a day, mainly due to higher deliveries of naphtha and vacuum gasoil, according to preliminary data from Kpler. That’s still about some 23% below pre-war volumes.

Russia’s refining revival may not last beyond the current season and “many of those growth factors may disappear by winter,” Turukalov said.

Fuel-oil consumption in Middle Eastern power plants may decline as temperatures drop. Russia’s summer demand for bitumen, which supports domestic producers of heavy oil products, will dwindle as the road-repair season ends, Turukalov said. In addition, the European Union, which is still a key consumer of Russian oil products, plans to stop imports from the country in February.

Even when the refining comeback reaches its limit, it wouldn’t necessarily lead to another slump in Russia’s crude output because the country may can raise exports flows, according to Turukalov.

“There are plenty of willing buyers of Russian oil and refined products in Asia,” said Ron Smith, an analyst at BCS Global Markets.