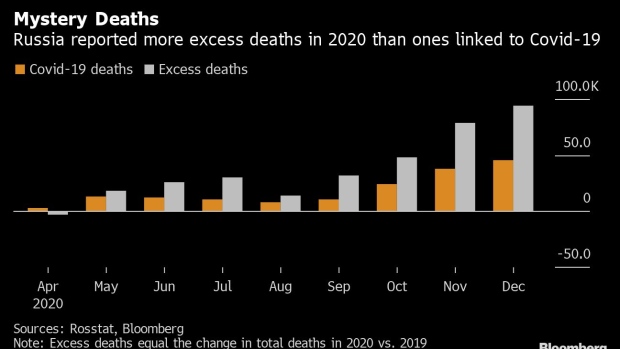 Cubicles housing patients on the arena floor inside a temporary Covid-19 hospital at the Krylatskoye Ice Palace in Moscow, Russia, on Tuesday, Nov. 17, 2020. Russia has 263,000 hospital beds for coronavirus patients, of which 84% are occupied, Health Minister Mikhail Murashko told a government meeting this week. , Bloomberg

(Bloomberg) -- Russia’s statistics agency will raise the number of deaths linked to Covid-19 last year in a report it plans to publish June 15, according to a senior official, an admission the pandemic’s toll has been worse than acknowledged.

“It’s probable the number of Covid-19 deaths will be higher than we showed before,” Rosstat deputy chief Pavel Smelov said in an interview.

The revisions come after the agency reported 2020 deaths linked to the pandemic nearly tripled compared to the figures initially reported by the government, raising the total to more than 163,000, amid criticism Russia was under-counting Covid-19 fatalities.

Smelov declined to comment on the scale of the new revisions. Rosstat’s most recent figures show Covid-19 was linked to less than half of the excess deaths recorded in April through December compared to the same period of 2019.

“Reduced immunity in people who had the coronavirus is a very serious issue,” Smelov said. “Many of them later ended up in hospitals and died from completely different causes, most often circulatory problems, strokes, diabetes, respiratory diseases and kidney complications.”

His service and the Health Ministry have been tracking such people, according to Smelov. The data show a trend that this group was more likely to die from an array of health problems than people who never got Covid-19, he said.

An increase in the number of fatalities attributed to the coronavirus raises questions about upbeat official assertions on Russia’s handling of the pandemic. President Vladimir Putin told 5,000 in-person attendees at the St. Petersburg International Economic Forum last week that Russia could hold such events because “our situation is better than in many other countries.”

Russia has the seventh-most deaths from Covid-19 globally, according to the daily figures it reports. However, it rises to third-most, behind the U.S. and Brazil, when using Rosstat’s figures.

The new data is unlikely to lead to a change in Russia’s policy. After an initial lockdown, authorities largely avoided restrictions in order to limit the economic fallout from the pandemic.

While western countries have seen a decline in infections as vaccination rates rise, Russia’s case count is growing amid a slow uptake of domestically-developed vaccines. The number of daily cases on Friday rose to the highest since February, while just 12% of the population has been inoculated despite widespread availability.

In data for 2021, the discrepancy between the number of Covid-19 related deaths and excess deaths has largely vanished. In April, Rosstat said there were 20,323 deaths linked to the virus, while there were 14,478 more total fatalities than in the same month in 2019.