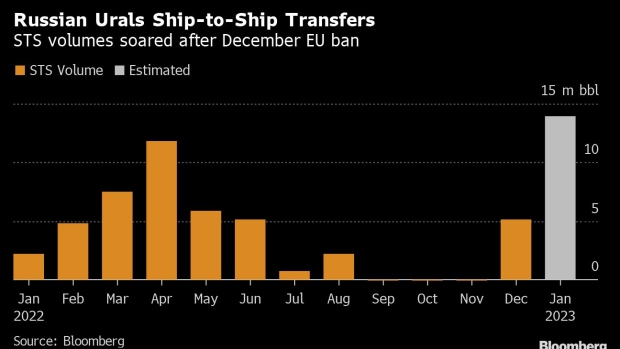 A total of 19 million barrels of the crude will likely get transfered at sea this month and last, according to tanker tracking data compiled by Bloomberg. The January tally alone is likely to set a record at 14 million barrels.

Early last month, the European Union banned almost all crude imports from Russia and joined a Group of Seven program capping the price at which Moscow can sell its barrels. The measures saw with freight costs soaring as ships became harder to find.

The transfers at sea, which all but dried up before the ban and cap, represent a more efficient way of getting Russian crude to buyers and should help to bring down those freight bills over time.

Under the G-7 program, ships engaged in ship-to-ship transfers are allowed to use industry standard insurance as long as the cargoes on board are sold at or below $60.

Ship-to-ship transfers are a routine part of oil trading and those that are taking place are doing so in full view of satellite tracking systems. Locations, such as Ceuta, a Spanish city on the north coast of Africa, and Greece’s southern city Kalamata, are once again becoming hotspots.

The transfers should also keep ice-strengthened tankers from straying too far from Russia’s Baltic Sea. Such vessels are needed in wintry conditions and the further they sail, the longer it takes for them to get back.

Most Russian Urals crude has been getting transported thousands of miles to Asia on relatively small tankers due to the European boycott. That stretched the fleet, pushing up freight rates for smaller tankers that aren’t so well suited to long-distance trading.

So far a total of five very large crude carriers, or VLCCs, the industry’s largest mainstream vessels, are likely to be involved in Urals STS transfers.

Three completed these maneuvers at Ceuta and sailed to Asia. Two more VLCCs are waiting at Ceuta while at least 6 Aframaxes, which have roughly a third the transportation capacity of VLCCs, are expected to arrive at the site by the end of this month after loading Urals from Baltic ports.