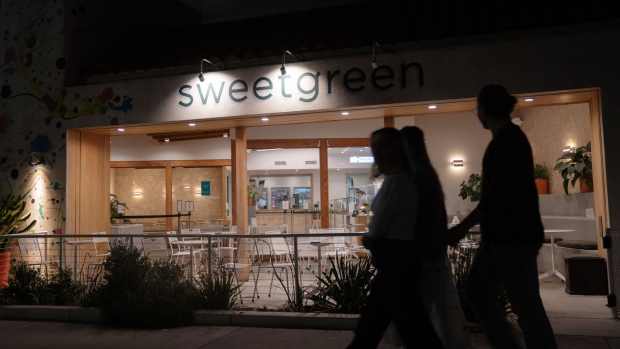 Pedestrians walk past a Sweetgreen restaurant on Sunset Boulevard in the Silver Lake neighborhood of Los Angeles, California, U.S., on Thursday, May 6, 2021. Los Angeles County and San Francisco County have reached a threshold to enter California’s most lenient yellow Covid-19 tier this week, setting the stage for the economy to be unshackled to the widest extent currently possible. , Bloomberg

(Bloomberg) -- Sweetgreen, the salad restaurant chain popular among office workers, is planning an initial public offering in the U.S., according to people with knowledge of the matter.

The Los Angeles-based company is working with Goldman Sachs Group Inc. on a listing that could happen as soon as this year, some of the people said, asking not to be identified because the information is private.

Founded in 2007, the chain has developed a cult following among bankers, tech workers and others. The company announced this month a partnership and investment from professional tennis player Naomi Osaka.

The company raised $156 million from Lone Pine Capital in January, valuing it at $1.78 billion, according to PitchBook. That followed a $150 million funding round in 2019 led by Lone Pine and D1 Capital, according to a statement at the time. Other backers include Fidelity Investments, Live Oak Endeavors, Blue 9 Capital, Big Loud Capital, Reshape Holdings, True Ventures and T. Rowe Price, PitchBook data shows.

Started by Georgetown University graduates Jonathan Neman, Nathaniel Ru and Nicolas Jammet, Sweetgreen operates more than 120 restaurants, according to a press release in May.