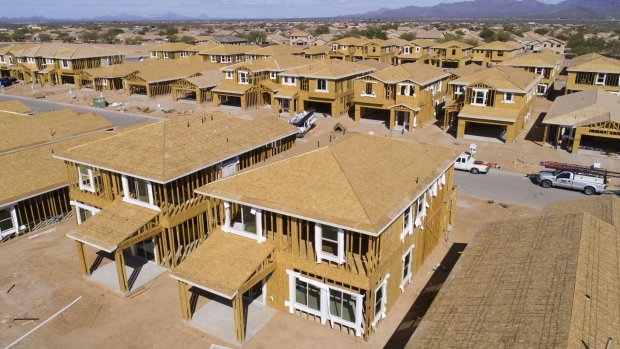 (Bloomberg) -- Sales of new U.S. homes fell in March to a four-month low, indicating high prices and surging borrowing costs are putting more of a squeeze on the market.

Purchases of new single-family homes decreased 8.6% to a 763,000 annualized pace, government data showed Tuesday. The median estimate in a Bloomberg survey of economists called for a 768,000 rate.

Mortgage rates have sharply escalated as the Federal Reserve signals aggressive steps to combat decades-high inflation. The average for a 30-year loan climbed to 5.11% last week, up two full percentage points from the end of last year and the highest since 2010, the latest Freddie Mac data show.

A separate report Tuesday showed home prices in 20 U.S. cities soared a record 20.2% in February from a year earlier, based on data from S&P CoreLogic Case-Shiller. Nationally, prices surged 19.8%, the third-biggest increase in data going back 35 years, according to Craig Lazzara, global head of index investment strategy at S&P Dow Jones Indices.

The new-home sales report, produced by the Census Bureau and the Department of Housing and Urban Development, showed the median sales price of a new home was up 21.4% from a year earlier, to $436,700.

The number of homes sold in March and awaiting the start of construction -- a measure of backlogs – increased from a month earlier to 255,000, the most in a year.

There were 407,000 new homes for sale as of the end of the month, the most since August 2008, with more than 90% under construction or not yet started.

At the current sales pace, it would take 6.4 months to exhaust the supply of new homes, compared with 5.6 months in the prior month.

The new-homes data are volatile; the report showed 90% confidence that the change in sales ranged from a 21.5% decline to a 4.3% increase.