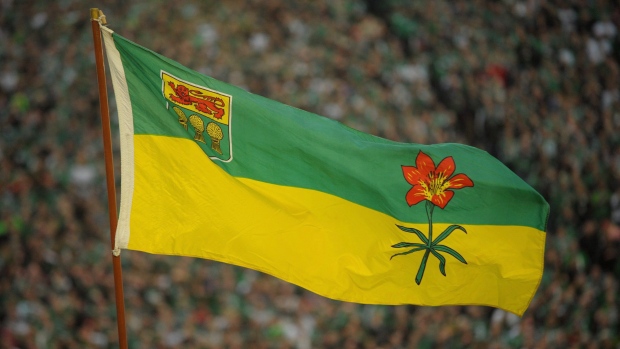 The Saskatchewan flag blows in the wind before the final Saskatchewan Roughriders game at Mosaic Stadium in Regina on Saturday, Oct. 29, 2016. , The Canadian Press

REGINA -- Saskatchewan's budget deficit is down slightly halfway through the fiscal year, tax revenue has taken a dip despite a higher provincial sales tax and a $300-million contingency fund has been drained.

The province is also expecting to bring in $53 million less than it had anticipated in March from taxes and non-renewable resources.

Harpauer says the budget is still on track because there have been increases in other revenue sources, such as a fuel tax, and a strong economic outlook is making for positive growth in the GDP for the first time in two years.

The contingency fund, however, is pretty much gone.

The province had already used about half of it in the first quarter to cover public-sector salaries when workers failed to agree to a 3.5 per cent pay cut.

"Compensation savings projected at budget are not likely to be achieved in 2017-18," Harpauer said in a release Wednesday. "This, combined with the lower revenue projection, fully uses the $300-million planned contingency."

Harpauer said the government is still trying to push through wage reductions.

"While it is taking longer than we would have liked, our government has asked employers to continue to pursue compensation savings, as part of continuing to manage our expenses very carefully as we pursue our plan to balance the budget by 2019-20."

The austerity budget delivered last spring was, by Premier Brad Wall's own admission, unpopular with voters because of cuts that were made to help tackle a $1.3-billion deficit from last year.

The deficit was due in large part to low resource prices, although Harpauer said Wednesday rising oil prices and strong oilfield investment are expected to support stronger growth in 2018.

Another factor helping the bottom line is that expenses are now projected at $9 million less due in part to fewer than expected crop insurance claims.

The Saskatchewan Party government took a number of measures in the budget to fight the deficit. They included increasing and expanding the provincial sales tax to six per cent from five and shutting down the Crown-owned Saskatchewan Transportation Co.

The government also slashed funding to libraries, community-based organizations and to funeral services for people on social assistance, although it eventually backtracked on those plans.

The provincial branch of the Canadian Taxpayers Federation said balancing the budget should be the top priority for all candidates vying for the leadership of the Saskatchewan Party.

A replacement for Wall, who is retiring from politics, is to be elected Jan. 27.