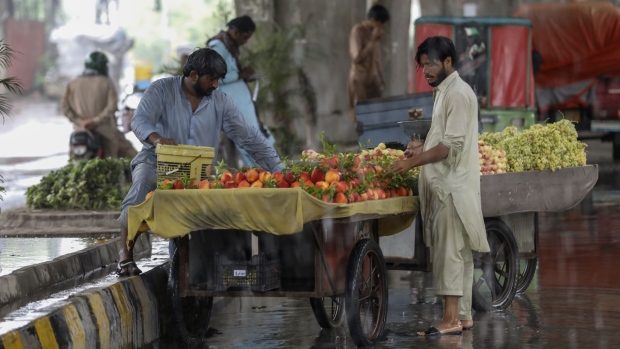 (Bloomberg) -- Saudi Arabia plans to renew its $3 billion deposit in assistance to Pakistan, as the South Asian nation looks to rein in one of Asia’s highest inflation rates and stave off a current-account crisis, according to people familiar with the matter.

The Saudi Finance Ministry plans to renew its $3 billion deposit with State Bank of Pakistan as soon as this week, the people said, asking not to be identified discussing private deliberations. The kingdom also plans to provide $100 million a month for 10 months in petroleum products that will be granted as additional support, the people added.

Pakistan’s funding gap has been covered after the kingdom’s commitment, the people said, adding that the assurance will pave the way for the International Monetary Fund’s loan approval at the end of the month. Saudi Arabia has been coordinating with the IMF to ensure that Pakistan is fully supported, one of the people said.

The commitment can be announced within the next two days, said one of the people. Representatives for Saudi Arabia and Pakistan’s Finance Ministry didn’t immediately respond to messages seeking comment.

The aid comes as the IMF has been looking to assess Saudi Arabia’s commitment to financing Pakistan before the multilateral lender disburses fresh funds to the South Asian nation. Bloomberg reported in July that the IMF wanted to ensure that Saudi Arabia will follow through with as much as $4 billion in funding to Pakistan to ensure Islamabad does not have a funding gap after the IMF loan.

Read More: IMF Is Said to Seek Assurance on Saudi Funding to Pakistan

Pakistan has a gaping trade deficit, a large fiscal hole and a $1.7 billion debt payment due in December. Averting default will depend on whether external support from Saudi Arabia and other countries materializes. Without it, default seems increasingly likely.

Saudi Arabia extended support multiple times to the nation. It pledged $4.2 billion in assistance to Pakistan when the former prime minister, Imran Khan, visited the kingdom in October. That included a deposit of $3 billion with the State Bank of Pakistan to help shore up its reserves and a facility to finance oil derivatives trade worth $1.2 billion during the year.

The kingdom discussed extending the term of its $3 billion deposit with Pakistan when Pakistan’s Prime Minister Shehbaz Sharif met the kingdom’s Crown Prince Mohammed bin Salman in May.