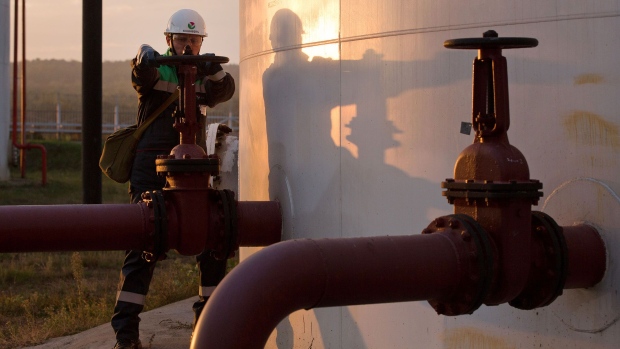 An employee turns a control valve on pipework beside a storage tank at an oil delivery point operated by Bashneft PAO in Sergeevka village, near Ufa, Russia, on Monday, Sept. 26, 2016. Bashneft distributes petroleum products and petrochemicals around the world and in Russia via filling stations. Photographer: Andrey Rudakov/Bloomberg , Photographer: Andrey Rudakov/Bloomberg

(Bloomberg) -- Saudi Arabia and Russia signaled they may be open to further output cuts after the latest OPEC+ deal to curb global oil supplies failed to stem the crude’s downward spiral.

The two nations said they will “continue to closely monitor the oil market and are prepared to take further measures jointly with OPEC+ and other producers if these are deemed necessary,” Russian Energy Minister Alexander Novak and his Saudi counterpart Prince Abdulaziz bin Salman said in a joint statement published after a phone call.

Oil has plunged more than 10% since the group on Sunday agreed to trim worldwide production by an unprecedented 9.7 million barrels a day. Yet even the historic cuts won’t be able to offset the demand loss expected from the coronavirus pandemic. OPEC on Thursday said it projects that demand for the cartel’s crude will fall to the lowest in three decades.

The joint statement echoes earlier comments by Saudi Arabia’s bin Salman, who has said that his country is ready to cut oil production further if needed when the OPEC+ alliance meets again in June. “Flexibility and pragmatism will enable us to continue do more if we have to,” he said on Sunday.

Even if OPEC members fully implement their share of the agreed cutbacks, they’d still be producing more than the market requires in the second quarter, according to the group’s own estimates.

West Texas Intermediate oil futures closed below $20 a barrel on Wednesday for the first time since 2002. The oil price crash has been particularly painful for Russia. The nation’s coffers will get less than $1 for each exported barrel of oil, according to Bloomberg calculations based on the data from the Russian Finance Ministry.

OPEC+ came to an agreement on the cuts after four days of contentious meetings that included a walkout by Mexico and intervention by U.S. President Donald Trump. In addition to the OPEC+ cuts, other major oil producers including the U.S., Canada and Brazil pledged that their own output would fall through market-based forces.