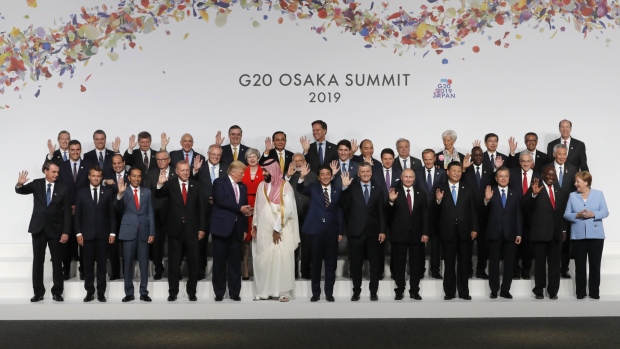 (Bloomberg) -- By now, President Donald Trump’s bromance with Mohammed bin Salman of Saudi Arabia is well documented. The platitudes and chummy photo-ops. The billions of dollars in U.S. arms sales. And, of course, the willingness to brush aside evidence implicating the crown prince in the murder of journalist Jamal Khashoggi.

But what’s gone largely unnoticed is just how enthusiastic the kingdom has been in snapping up America’s debt.

After aggressively culling its holdings of U.S. government debt for most of 2016, Saudi Arabia has amassed an even larger position since Trump’s election in November that year. Based on the latest reported figures, the nation nearly doubled its ownership of Treasuries to $177 billion. No major foreign creditor has ramped up its lending to the U.S. faster.

Coincidence? Perhaps. After all, you could probably marshal any number of plausible explanations for the timing of the oil-exporting nation’s buildup that don't involve some political quid pro quo. Rising petrodollar revenue. Risk aversion. A shift out of negative-yielding bonds. And considering how big the U.S. deficit has grown because of Trump’s tax cuts, the amounts involved won’t move the needle all that much when it comes to America’s financing needs.

Whatever the case may be, however, this much is clear: as Trump continues to defend Prince Mohammed in the face of growing criticism on a whole host of issues, from the Saudi-led war in Yemen to his alleged role in the gruesome killing of Khashoggi, the kingdom has everything to gain from appearing to lend financial support to its most important ally — even if it isn’t intentional. That's particularly true after talk surfaced in May that China, the largest foreign creditor to the U.S., might be considering the unlikely move of dumping its Treasuries to punish Trump over his trade war. (Though at the Group of 20 summit in Osaka, the two countries declared a truce, at least for now.)

“It’s a relationship where one hand washes the other,” said Martin Indyk, a distinguished fellow at the Council on Foreign Relations and a former U.S. special envoy to the Middle East during the Clinton administration. Buying of Treasuries could be a “manifestation of the closeness of the relationship.”

Indyk was quick to note he doesn’t have any particular inside knowledge on the situation and the Treasury market is a natural destination for Saudi Arabia’s petrodollars anyway. But he suggested that as tensions between the U.S. and Iran escalate, it also makes sense Trump would want the Saudis to boost production to keep oil prices in check. More output means more petrodollars, which can then be recycled back into Treasuries.

The numbers stand out. From the end of October 2016, the last month before Trump’s election, through April of this year, Saudi Arabia upped its ownership of Treasuries from $97 billion to $177 billion, Treasury Department data show. The 83% jump was by far the biggest among the top 12 foreign creditors in percentage terms. (The U.K., a banking center whose figures are seen as a proxy for hedge funds and other global investors, had the biggest absolute gain. Its holdings rose from $207 billion to $301 billion.)

The Saudi Arabian Monetary Authority, which manages the country’s investments, didn’t respond to a request for comment.

The buildup is also noteworthy because of just how dramatically Saudi Arabia reduced its holdings in the months leading up to the election. In the first nine months of 2016, the kingdom slashed its ownership of Treasuries by almost 30% in its most aggressive retreat in over a decade.

A big part of the drawdown had to do with Saudi Arabia’s fiscal crisis at the time, when the monetary authority burned through tens of billions of dollars to plug its biggest budget deficit in a quarter-century. Yet there was also plenty of speculation about Saudi Arabia’s political motivations as well.

In April of that year, the New York Times reported that Saudi officials warned the Obama administration and members of Congress it would sell off $750 billion worth of Treasuries and other American assets if lawmakers passed a bill allowing the kingdom to be held liable in U.S. courts for the Sept. 11 terror attacks. (It ultimately became law after Congress overrode President Barack Obama’s veto.) That came after America took tentative steps toward a rapprochement with Saudi Arabia’s archrival Iran, highlighted by the landmark nuclear deal under Obama that Trump pulled out of last year.

So with Trump, the kingdom has every incentive to play nice.

Besides breaking with tradition to visit Saudi Arabia on his first foreign trip, Trump and Jared Kushner, his son-in-law and senior adviser, have forged close, personal relationships with the crown prince, who’s known as MBS. At the G-20, Trump met the kingdom’s de facto leader for breakfast on Saturday, calling him a “friend” and praising their “great relationship.”

Crucially, Trump has repeatedly downplayed Prince Mohammed’s role in Khashoggi’s killing inside the Saudi consulate in Istanbul, in spite of CIA intelligence that led lawmakers to unanimously assign blame to him. (Saudi government officials have denied that he had anything to do with the murder.) In May, Trump even bypassed Congress to approve a $2 billion arms sale to Saudi Arabia over bipartisan objections. While the Senate blocked the move, Trump will likely use his veto to push the deal through.

Critics say that by repeatedly giving Saudi Arabia the benefit of the doubt, Trump has provided cover for Prince Mohammed — once feted as a progressive reformer — to crack down on dissent at home and wage a brutal war in Yemen, which has led to over 200,000 deaths, according to the United Nations.

Granted, there are reasons to think that Saudi Arabia’s investments in Treasuries have nothing to do with politics. From the end of October 2016 through April this year, the price of Brent crude oil rose just a shade over 50%, a boon for the coffers of the world’s largest oil-exporting nation.

Saudi Arabia may also be shifting its exposure away from lower-yielding European bonds, according to Marc Chandler, chief market strategist at Bannockburn Global Forex. After all, 10-year Treasuries currently yield about 2%, versus roughly -0.33% for German bunds. And as the world’s safe-haven asset, it’s not hard to see Saudi Arabia moving into U.S. government debt as a hedge for weakening global growth.

“I suspect this is partly a debt management issue” rather than from any political motive, Chandler said. “Especially since there hasn't been a rise in Saudi Arabia's (foreign) reserves.”

Indeed, even as the country’s holdings of Treasuries have jumped, its foreign-reserve assets have hardly budged. It’s a potential sign that Saudi Arabia is funneling more cash to plug its deficit as it ramps up domestic spending.

Yet in some ways, Saudi Arabia’s ownership of U.S. government debt has always been influenced by political considerations. For more than four decades, how much the kingdom actually held was kept secret from the public as part of a strategic agreement brokered during the Nixon administration. The unique arrangement bound together two countries that shared few common values, reshaping U.S.-Saudi relations for generations. It was only in May 2016 that the U.S. began releasing a detailed breakdown of Saudi Arabia’s holdings in response to a Freedom of Information Act request filed by Bloomberg News.

Like a handful of other countries, Saudi Arabia has traditionally held its Treasuries across a number of global financial centers, according to longtime observers. And it’s likely the official tally understates the true size of the kingdom’s holdings, which is masked behind those of other countries. The recent uptick suggests to Setser the country now has less reason to obscure its investments from broader view than it did in the past.

“Whether it’s that they’re best friends with Trump or feel more comfortable overall — the portion of the Saudi reserves that is showing up in the U.S. data has clearly been going up over time,” Setser said.

--With assistance from Michael Shepard.

To contact the author of this story: Liz McCormick in New York at emccormick7@bloomberg.net

To contact the editor responsible for this story: David Papadopoulos at papadopoulos@bloomberg.net, Michael Tsang