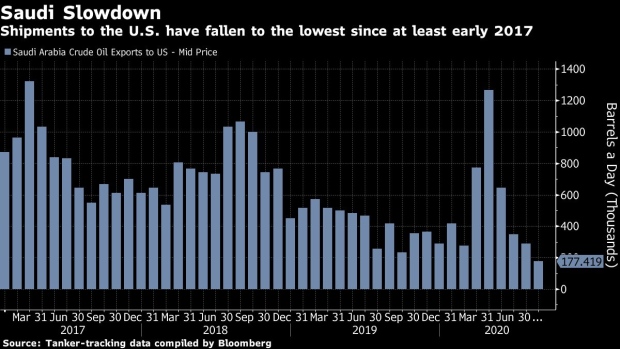 (Bloomberg) -- Saudi Arabia is continuing to divert its oil away from America’s shores.

The kingdom last month loaded about 5.6 million barrels a day on to tankers, a small increase from July, vessel-tracking information compiled by Bloomberg show. Within that, an ever-smaller share went to the U.S., and cargo data show that deliveries in the week ended Aug. 28 dropped to what could be the lowest in decades.

For Saudi Arabia, cutting oil shipments into the U.S. is the quickest way to telegraph to the wider market that it’s tightening supply. The U.S. government is alone among major oil-consuming nations in publishing weekly data on crude stocks and imports, which carries enormous influence among oil traders. Those figures will be released later on Wednesday.

Saudi crude exports to the U.S. dwindled to about 177,000 barrels a day in August, tracking data show. Although that number could rise as more vessels indicate their final destination, it’s still a fraction of the 1.3 million barrels a day the kingdom shipped to America in April, when the flow threatened to upend the U.S. oil market.

While it’s clear that shipments on the trade route are slumping, data from vessel tracking and cargo unloadings often won’t tally perfectly with weekly import numbers produced by the Energy Information Administration. That’s because it’s not possible to know precisely when a cargo that gets unloaded will appear in the U.S. government data.

The U.S. imported 355,000 barrels of Saudi crude, or about 51,000 barrels a day, in the week through Aug. 28, customs data compiled by Bloomberg show. That entire volume arrived on the West Coast. The U.S. began publishing weekly data in 2010. Before then the figures were monthly. Flows in the weekly data have never been below 51,000 barrels a day. In September 1985, there were no receipts of Saudi crude for the entire month.

Government data processing and weather can further complicate the picture. A 496,000-barrel shipment of Saudi crude arrived in Port Arthur, Texas, on Aug. 21, though it wasn’t processed by customs until three days later, so it’s not clear whether it will be included in the EIA figures, which cover the period Aug. 22-28.

Hurricane Laura, which battered the U.S. Gulf Coast last week, may have also affected shipments. More than 60 oil and gas tankers sought refuge in the western Gulf, waiting for the storm to pass. Only two supertankers from Saudi Arabia were scheduled to reach the region after mid-August -- others were bound for the West Coast.

One of those vessels, Khuzama, discharged its cargo and idled near southern Texas until Laura blew past, eventually making its way toward Louisiana. Another, Rimthan, was scheduled to arrive at its destination on Aug. 31. It lingered briefly near South America until the storm subsided and is now entering the Gulf.

Supertankers in the Gulf generally offload their cargoes on to smaller vessels for delivery to import terminals. A single supertanker, capable of hauling 2 million barrels of crude, can significantly affect imports. A full vessel could add 285,000 barrels a day to weekly import data.

It takes five-to-six weeks for a tanker to make its way from Saudi Arabia to the U.S. Gulf or West Coasts, meaning any vessels that left in August won’t arrive until at least the middle of this month. If crude loadings from the kingdom in recent weeks are any indication, the U.S.’s dry spell of oil imports from Saudi Arabia is likely to continue for some time.