The walls are covered with graffiti in the sleepy fishing village of Khurayba. There are supplications to God, advertisements for vacation rentals and house painters. Near the local school, there’s a scribbled plea: “Open the windows of hope and drive out the despair.”

It’s here in northwest Saudi Arabia that Crown Prince Mohammed bin Salman wants investors to put their money to realize his US$500 billion vision for the region. Called “Neom,” it promises to be the most freewheeling part of the kingdom, with state-of-the-art resorts and smart technologies run by robots.

But it’s also here where the risks to the 33-year-old prince’s grand plan for his country are writ large. Neom is the boldest pillar of a social and economic transformation that so far has seen at least as many delays as successes. Indeed, the question since the prince announced the vast development at an extravaganza in 2017 has been whether it can become a reality.

A three-day trip to the region, which is roughly the size of Massachusetts, showed the scale of the task as well as the potential. Many of the locals who have lived there for years are looking forward to some prosperity, while others are concerned they will be removed and their homes bulldozed.

The area has stunning, untouched shorelines with waves rippling in the turquoise water. Purple volcanic mountains loom over the Red Sea. Historic sites include a wadi where locals believe Moses landed when he crossed over from Egypt, alighting in a valley along the water.

Construction workers have already descended on the small towns and some building has started. The small Neom Bay airport, with its gleaming white interior, opened for commercial flights last month. Workers were driving construction equipment along the roads. An “I (heart) Neom” sign sits outside a heavily secured base camp of temporary housing for employees, the road leading to sleek white homes lined with solar-powered streetlights. 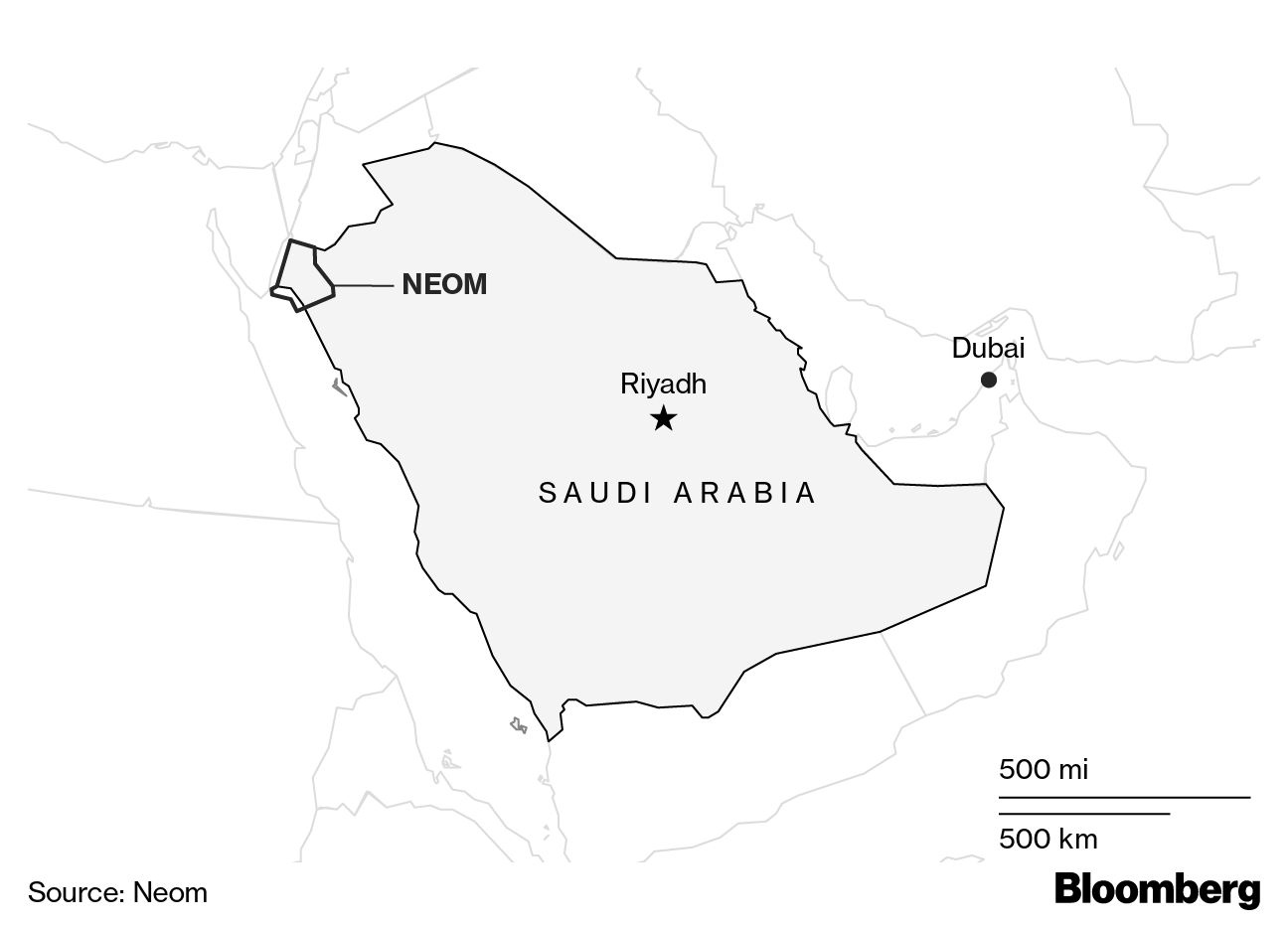 “It’s not only a vision on paper,” said Lojain Alharbi, a 25-year-old Neom employee who works as a business analyst for the sports sector. “It’s already happening.”

In an interview with Bloomberg in October 2017, Prince Mohammed said that by 2030, the completion date for his transition to Saudi Arabia 2.0, Neom will contribute US$100 billion to economic output.

The name comes from “neo,” meaning new, and “m,” the first letter of mustaqbal, Arabic for future, he said. There will be 12 small cities or towns next to the sea in Neom and others in the valleys and mountains, he said in another interview a year later, as well as an industrial zone, a huge port and several airports.

What Neom Says Is Happening

-There’s interest from foreign companies and more talks are expected.
-Neom plans to start a fund to invest in businesses that will either be based there or sell goods and services there.
-More than 400 firms are “interested in discussing opportunities” with the fund.
-Seven foreign companies are vying to lead development of Neom Industrial City, the project’s second phase.
-Plans to build a causeway linking Saudi Arabia to Egypt are going ahead.

Yet looming large is not just the cost or the challenge of luring foreign investors into what some see as a vanity project, it’s also the politics.

The project is closely tied to Prince Mohammed and until he assumes the throne when his father, King Salman, dies, there will be uncertainty about the transition and what might happen to his plans.

“We really don’t have details about anything in Neom, which is why we don’t know how viable it is,” said Steffen Hertog, associate professor in comparative politics at the London School of Economics and Political Science. “No one seems to have committed any sums. Things are moving a bit more slowly than was anticipated.”

There’s also the challenge of drawing tourists to an area that’s a hop away from established resorts like Sharm El-Sheikh in Egypt. Saudi Arabia bans alcohol, and while Neom is expected to have looser rules than other parts of the kingdom, the prince has said that those who want to drink can go to Egypt or Jordan.

“Companies understand that we are building not only a region, but a commercial powerhouse, and they want to be a part of it,” Neom said in a response to questions on Wednesday.

For the tens of thousands of people currently living in the 26,500 square kilometers (10,200 square miles) allocated for the project, the concern is more about where they will end up. News that they will become part of a global megaproject has brought a mix of hope of economic prosperity and also worry stoked by rumors that they will be resettled to make way for luxury villas and office parks.

More than 20,000 people will need to be moved based on current estimates, Neom said. “The relocations will be done as part of an established process that is being worked on with the World Bank,” Neom said. “Residents will be compensated, and there will be a number of social programs in place to support them.”

Until Neom was announced, the region was relatively unknown and neglected. Schools and electricity came to the area as other Saudi regions were prospering from the first oil boom in the 1970s. Dirt roads still connect many homes in the villages.

“We’re in a state of waiting for the future,” said Mahmood, a 54-year-old Khurayba resident, adding the resettlement issue has become the main topic of discussion. “This is the point that makes them scared of the transformation.”

Despite his worries, Mahmoud hopes he and other villagers will become part of Neom rather than marginalized. Neom has announced a new scholarship program to send local students abroad to study tourism, hospitality and antiquities.

Driving past his single-story school that now lies in ruins, Mahmoud pointed at the small rooms where he squatted on the floor to study by lamplight in 1975. The area didn’t get electricity until the 1980s, with only the sea breeze to cool the summer heat, he said.

Last week, Saleh al-Huwaity, an 48-year-old resident of nearby Sharma, dismissed fears of being removed. In between puffs of smoke at a fly-ridden café with ripped couches and bare walls, he rattled off a list of boons that have already arrived in his village.

There are ATMs now, and a 24-hour clinic opened. An influx of workers has sent rent prices soaring, lining the pockets of local landlords, including him. He hoped to one day see Sharma’s public beach—a stretch of sand littered with trash—outfitted with cycling paths.

“We’re very, very, very, happy, because I lived here before and there was nothing,” said al-Huwaity, who works in the coast guard. When villagers bring up the resettlement issue, he responds with: “Our government is compassionate with its citizens.” Besides, he added, “if the interest of the country requires that I give up my home and my farm, take them!”

As workers arrive on site, the talk of “more robots than humans” that accompanied Neom’s launch has faded. In its place is the down-to-business approach of its chief executive, Nadhmi Al-Nasr, formerly of Saudi Aramco.

The first phase of the project, Neom Bay, which includes the Khurayba and Sharma villages, was originally scheduled for completion in 2021. U.S. engineering firm Aecom was awarded the project management consultancy contract for the bay earlier this year.

The second phase of Neom will be an industrial city, an idea the kingdom executed successfully before in Jubail. Neom has invited bids from seven foreign firms to identify which will lead the development, the company said in its response to questions. Neom is also moving forward with plans to build a causeway to Egypt and contracts have been awarded to Arup Group, WSP and Fugro NV so far, it said.

For now, Sharma and Khuraybah come to life when the king spends his summer holidays in Neom. It’s the second year that he’s eschewed vacationing in Morocco. The two large hotels in the area were full and traffic on the roads has increased, as have police patrols.

At her small shop in Sharma, Salma hopes Neom will help change mindsets in the village she grew up in with the exposure to foreigners.

Though Salma graduated from college with a mathematics degree, she lives a life so circumscribed by local customs that her family won’t allow her to go to the sea, just a few minutes away. Her days are spent between home and a women-only shop she runs selling items like diapers, nail polish and Hello Kitty hair accessories.

Asked how her life would change when Neom comes, Salma repeated the question with a smile. “Of course it will change,” she said. “For the better, of course.”

Other residents, however, aren’t so sure.

“They’re looking forward to good things coming,” said Abdulaziz Al Huwaity, 40, from Khurayba. “But these good things, will the people of Neom have a share of them?”

--With assistance from Hayley Warren and Patricia Suzara